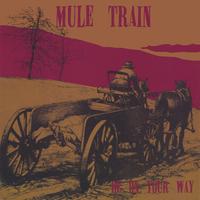 Be On Your Way

Mule Train recently blew through Seattle and I am somewhat remiss that I missed their show; partially because listening to the cow-punk-centric Be On Your Way makes me believe that they would put on a riotous, ass-whoopin' show, and also because the venue they were billed to play, Maddog's Stanwood Hotel & Tavern, sounds like the perfect place to get your ass whooped if you fuck with the patron's Country & Western. If song titles mean anything, names such as "Tear it down," "Come Out Swingin," "Weapons" and "Fuck Me Morose" tell me that these boys are itchin' for a brawl, and their ain't much better in life than sitting back with a cold PBR, watchin' some skinny Honky-Skronkers from Cali throw down fisticuffs. "Yippee-Ki-Yay Mother Fucker! Oi! Oi! Oi!"

But what I am most curious in knowing is whether these boys were punkers who fell in love with their daddy's Hank Williams 45's, or country boys who stumbled upon a Clash record? My astute prowess tells me that these Santa Cruz natives undoubtedly mastered the half-pipe before they picked up the mandolin, and lyrics such as "I ain't from Nashville/or Tenessee/suburban sprawl/was the birth of me" only confirms my theory. Paul Davis has a classic punk-rock voice ala The Clash which, when used melodically, gives me a nasty Anthony Kiedis flashback. Musically, Mule Train vacillates between punk, ska and western, sometimes the only Americana resemblance being a country-fried kick-snare timing signature.

Rounding out Be On Your Way are mandatory shit-luck country tunes such as "Done My Time," "Carrying On," and "Two Bit Town," peppered with mandatory anti-establishment and nuclear fallout punk anthems and the occasional sarcastic pop-culture reference to Nelly and Emo rock. While this is all good and fun, one gets the feeling by the end of the LP that they aren't incredibly sincere about their Tonkin' roots, but are rather a bunch of mall kids having fun with the idea of being hicks. I say go all the way… shave off the fu and grow out a proper lamb-chop/cookie-duster/mullet combo. Hell, get yourself a bolo tie and snakeskin belt with matching boots and really get into character. Out of plain curiosity, I was about to take advantage of the offer listed in their CD art to sign up for their fan club; quite a bargain at $1.00 (plus SASE)… but then I thought — do I really want these guys to know my address?