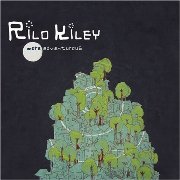 More Adventurous {the third release from California's Rilo Kiley} is the kind of album that we hope for, but rarely get. Its syrupy sugar-pop harmonies, pared-down country ballads and forlorn, lonely lyrics are the stuff musical dreams are made of.

Rilo Kiley {Jenny Lewis, singer; Blake Sennett, guitarist/singer; Jason Boesel, drummer and Pierre De Reeder, bassist} are a band who've tinkered with various combinations of sound over the span of their discography. Their 2001 debut record Take Offs and Landings received more attention for the band's lineup of child actors than its music {Lewis starred in "Troop Beverly Hills" as a kid and Sennett was on Nickelodeon's "Salute Your Shorts"}. Their sophomore effort, The Execution of All Things, released on Saddle Creek Records, was acclaimed by sources as wide as the New York Times.

For their latest record, Rilo Kiley wanted to take their music in another new direction. They released More Adventurous on their newly formed Brute/Beaute Records label, with a major-label distribution deal on the side. Some fans have questioned how the big-time business would affect RK's underground status, but the resulting More Adventurous is a disc laden with poppy up-tempo tunes and tears in your beer slow numbers — songs that, while richer than those of RK's past, are undeniably good. More Adventurous is both a nuanced throwback to the lovelorn 1950s and '60s and a great present-day rock record.

The star of this release is Lewis' sultry voice, which beautifully and naturally overpowers the record. Truth be told, I am not frequently drawn to female vocalists {throw rotten tomatoes my way if you wish}, but Lewis' voice stopped me cold. This leading lady {who also sang backup on the Postal Service's masterpiece debut, Give Up} is earnest, strong-willed and full of gusto in her delivery and her lyrics are just as stunning. She is a storyteller blessed with a honey-sweet voice, and she belts her pretty little heart out on this record.

The production of this album is crisp, balanced, and even a bit retro {"Does He Love You" sounds like a lost classic and "Ripchord" features the unmistakable hiss of AM radio}. Steel guitars and orchestral strings get equal time and equally make sense paired with the tunes. Strange instruments also make appearances — when is the last time you saw "flugelhorn" listed in the liner notes of a rock record? But for all the eccentricities and leanings toward being overproduced, More Adventurous somehow comes across as quaint.

"Portions for Foxes" is a standout single, with its shimmery new-wave guitar melody and Lewis' lamentingly sexy chorus that she's trouble incarnate {"I'm bad news, bad news, bad news…"}. "It's a Hit" also showcases the lyrical and melodic talent of Rilo Kiley. The rocky "Acidntel Deth" and "Love and War (11/11/46)" are peppy and smart. But it is the melancholy tracks that let the band shine. The wistful "I Never" lies somewhere on the continuum between Patsy Cline, Loretta Lynn, and Olivia Newton-John's searingly sweet "Hopelessly Devoted to You". The title track to "More Adventurous," the vocals so wrought with emotion, makes my heart sag with sadness — but the track is beautiful.

This album is a gem of a record and a sparkling addition to anyone's CD collection.