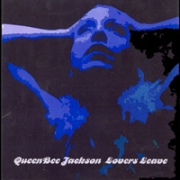 When Queen Bee Jackson's latest release, Lovers Leave, arrived at imaginary headquarters, it wasn't in the typical padded manila envelope stuffed with press releases. Obviously, QBJ knew their delivery target well. Lovers Leave cleverly arrived in a retro purse, stuffed to the brim with the kinds of items we gals most always keep in our handbags: sparkly ruby lip gloss {used}, Kleenex {crumpled and questionably sanitary}, and a compact mirror scribbled with a date of an upcoming QBJ show. And, of course, the CD. Smart packaging, as we all know, can be an effective marketing tool to lure consumers in, but it's ultimately the product behind the packaging that must withstand scrutiny.

Once I cracked open the jewel case and threw the disc in the CD player, I was shocked. QBJ produce mid-90s grungy, ethereal rock—not what I was expecting in 2004. It's not bad, just perhaps a few years late.

Lovers Leave is awash with sonic landscapes, oozing with mood. An eerie effect transposes when Spray's breathy vocals are layered atop a down-tempo, spartan backdrop. Cited influences like the haunting Jeff Buckley and shoe-gazer mainstays My Bloody Valentine abound in QBJ's music. For example, the closing track, "Bits and Pieces," carries on for more than 10 minutes while Spray softly wails and repeatedly gasps, "I'm not sad" overtop an effects-riddled guitar.

With four rough songs to go on, it's difficult to ascertain how developed the band sounds live, but if you're feeling adventurous, make sure to catch Queen Bee Jackson next time they journey to Seattle from their Portland homebase.