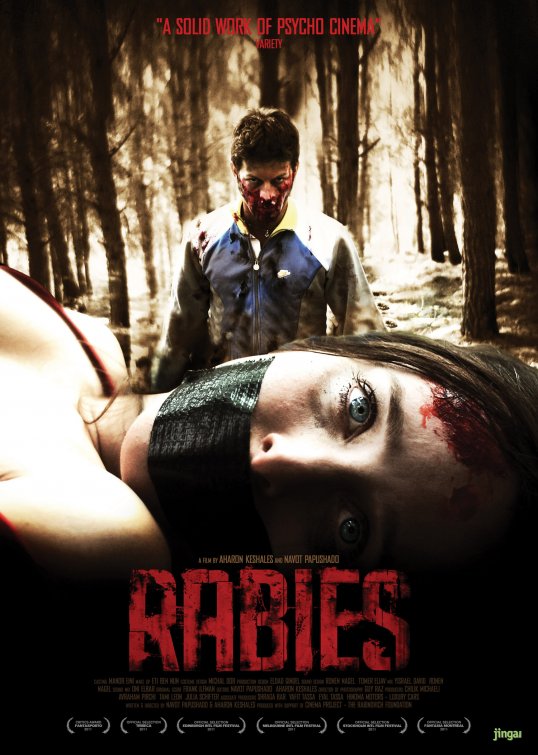 My Favorite Films of 2011 That Might As Well Be Imaginary

Last year I did a post about my ten favorite films of the past year that sadly hadn't seen a theatrical release in Seattle (nor a DVD release to my knowledge). While some might view that as just mean, I got enough positive feedback that I'm reprising the effort.

What follows are pictures I saw during festival travels (including all the way to Seattle) that are some of my favorite watches of the year. If you just can't get enough of these lists you're welcome to review my overall top films for 2011, or my most memorable 2011 film related moments not related watching a film.

The latter of which I'm especially pleased with – if I do say so myself. The list below isn't in any particular order. And I reserve the right to declare new favorites on a whim. Feel free to read something into the placement if you like…

Boy and His Samurai (Japan) – Cramming in genre elements of time travel, samurai lore, and offbeat romantic comedy this one's got something for everyone.  The story revolves around single mom Yusa, a modern woman in Tokyo who struggles in her job due to also having to care for her son Tomoya (the boy of the title). Good at her job Yusa can't help but be frustrated when her commitment to it is questioned in the office by the men without child care responsibilities who can stay later. One day she runs into a fellow dressed in traditional samurai garb (haircut included) and carrying a large sword. Kajima is clearly lost, afraid of ringing telephones and speaks in a bizarrely formal manner. Long story short he was praying to a Buddha statue and got sucked forward in time. Could happen to anyone. Really enjoyed this and am rapidly becoming a fan of the director, Yoshihiro Nakamura. His first film Fish Story about the Japanese punk rock song which saves the world is also kicking. I haven't seen his middle picture Golden Slumber but as soon as it's available I'm going to check it out.

Headhunters (Norway) – This story of a corporate headhunter with height based self esteem issues and a side gig as a high end art thief … rocked.  It looks great and takes a turn from caper to revenge picture without missing a beat. The lead actor does a terrific transition through some key milestones making it a pleasure to watch from start to end. Keep an eye out for it and pray you can get to it before Summit who just bought the English language rights does heaven knows what to the film. Maybe adding teen vampires and Eddie Murphy for all I know. Por El Camino (Brazil) – Was one of my top picks of SIFF 2011. An uber-watchable road movie that meanders through absolutely breathtaking parts of Uruguay.  The most dangerous thing about the film is that you're going to want to book a ticket as soon as the credits role.  Like many road movies it also involves a guy and a girl.  Santiago is a former investment banker who is in the process of making changes in his life and en route to check out some property left to him after his parent's death.  Juliette is on her way to pickup a romance that started in Costa Rica.  In addition to presenting one of the least douchey investment bankers in the history of cinema the film takes us along on a relaxed and romantic trip.  The chemistry between the pair is great, the other characters are interesting, and there's always something interesting to watch.  Even the music doesn't suck.  It's a very enjoyable way to spend 84 minutes is what I think I'm trying to say.

Rabies (Israel) – One heck of a darkly funny folks stuck in the woods and bad shit happens story. Ostensibly the first Israeli slasher film made. If true they've caught up in a BIG way.  Works as a well plotted, beautifully shot, clever and slightly subversive take on the genre.  Then there are the preternaturally gorgeous female members of the cast. And for the trifecta Rabies provides an opportunity to argue discuss post-viewing whether there's a socio-political subtext to the whole affair. The fact that I don't even like slasher films should make folks sit up and take notice. Seriously – if I could I'd stop writing this post right now and watch it again. For reals.

Sound of My Voice (USA) – Peter and Lorna are a couple whose work on a documentary about cults has them seeking to infiltrate one. Specifically one worshipful of the eerily compelling Maggie (Brit Marling).  They earn enough trust to be brought to meet Maggie in an undisclosed basement location.  She never leaves this basement where cult members grow her food, donate blood to her and listen to her lessons about the upcoming crisis about to beset the earth.  I'd strongly suggest not reading anything else about this film and just making sure you see it first opportunity.  If I haven't sold you already then let me add that it features both the creepiest use of patty-cakes in a motion picture and the best use of a Cranberries song ever. 'nuff said.

Bull Head (Belgium) – isn't an entirely easy film to describe. Set amongst farming communities of Belgium it's a character study of bovine related criminal activity, testosterone fueled violence, and a family tragedy buried for years. When a young boy suffers horrific violence at the hands of a son of a local organized crime figure there's not much to be done for him.  With his sense of manhood deeply (and quite literally) crushed his overcompensation and emotional betrayal is palpable onscreen.  He's a brute of a man, mostly quiet, but one senses with a tremendous and powerful rage simmering just below the surface. In an agricultural world awash with illegal drug use (mostly on the cows) there's a lot that can go wrong.  And this dark character study takes us through it.  It's not a fun watch, but it's a fascinating one – well organized and viewable on several levels.  Though all of them are likely to keep you sticking to certified organic milk.  Absolutely dynamite performance from both the adult lead actor and the boy who plays the same character as a child.

Dog Sweat (Iran) – With a feel that reminded me of No One Knows About Persian Cats, this film from Iran really worked for me.  Following a loosely interwoven set of young people just trying to do what young people do.  Make music, date, love the gender of their choice, smooch, drink and play with their friend's dog.  None of which is really on the agenda for good kids in Iran.  No artistic, interpret it yourself, lone child wandering through a village without shoes Iranian filmmaking here.  With the look of a US indy shot in Tehran it's easy to like the characters and feel their pain as they chafe  against societal restrictions.  Hard to see how that's going to hold up there long term – but in the meantime the filmmaker took a lot of risks to make this strong film.  The opening scene showing three male friends joke around and argue about the different categories of Johnnie Walker was just great.

Poupoupidou (Nobody Else But You) (France) – Well, I'm getting a bit lazy. So I'm going to just quote Imaginary Amie, "This movie sounds like it would suck: a local cheese queen who bears an uncanny resemblance to Marilyn Monroe is murdered, and a writer investigates her story after falling in love with her – post-mortem. But this one still sticks to me – I can't stop thinking about how clever it was. Just a really solid little mystery." – I concur!

The Sandman (Switzerland) – Bright, beautiful, romantic, and incredible bizarre The Sandman is a must-see film. Benno is an ultra-uptight neat freak who works in a stamp shop. When he's not ripping off the gullible he obsesses about his weight each morning, provides brutally critical feedback to friends about their life's work and gives untold grief to a young woman who works in the coffee shop below his apartment.  All in all a real mensch – or perhaps not. Then out of nowhere he develops and unusual affliction. He begins to leak sand. And nor just regular sand but magical instantaneous sleep inducing sand. Which similar to normal sand tastes horrible in pasta. This explosion of essentially dirt doesn't really fit in with his other lifestyle choices. Especially when it causes his hot girlfriend to think he's bedding the coffee shop girl (it makes perfect sense in context). Even his earnest protest that it can't be true that he's hooking up with the presumably frumpier woman because "looks are important to me" fails to mollify her. Oh, almost forgot. In the meantime he's also beginning to share a recurring dream with the waitress he professes to hate.  This is a strange film – in a very colorful visual way that reminds me of a Michel Gondry creation, though more fun for me than his recent work.   If you're not sold by now there's nothing I'm going to be able to help you with…

Womb (Germany) – is really well done, a solid execution of marvelously fucked up premise.  Girl meets a boy by the shore – they hang out and grow close until the girl has to move away with her Mom to Tokyo.  Years later she comes back and the soulmates pickup – this time with a physical relationship.  Then he dies.  So she clones him – giving birth to her former lover herself.  Yep, as you would imagine everything goes totally fine.  No, not exactly… Set in the near future where this sort of thing goes on, with dramatic seaside backdrops and limited dialog this film pulled me into its world.  Most positive additional thing I can think to add is that this is a model of showing vs. telling – no musical cues, no big exposition.  The film just ensures you know what's going on when you need to without smashing your face into things.

You Instead (Ireland) – Shot on location at Scotland's "T in the Park" music festival You Instead manages to mashup the best aspects of a adrenaline pumping concert picture with a relationship origin story along the lines of Before Sunrise.  Without making you face any potentially ambiguous feelings you may have about the watchability of Ethan Hawke. … Two bands meet, one a group of women the other a male duo – and seem to take an instant dislike to each other.  Due to a series of events that almost make sense in context the lead singer from one band ends up handcuffed to one of the female performers.  Chained together they do their best to go about their day – which of course turns into something unexpected.  At least unexpected if you've never, ever seen a movie like this.  Though I'll admit I can't quite recall another example where 'meeting cute' involved handcuffs.  The filmmaker effectively captures the power and excitement of the concert's live performances making the music festival more than just a high concept backdrop.  Plus there's enough mini-stories involving the other band members to keep things diversified.  In some ways it reminded me of last year's SXSW entry This Movie is Broken – but overall found this a more complete experience.  Please note I'm a total sucker for these sort of love stories – so I may have been easy prey for You Instead.