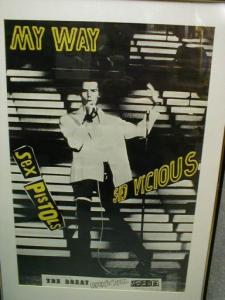 "My Way" by the Sex Pistols

There is something undeniably amazing about the Sex Pistols cover of Sinatra’s “My Way”. Sure, it is one of the few songs that Sid Vicious “sung”. I use quotation marks there because I don’t know if I can technically call what Sid does on the track as “singing” as such, but more of a caustic spewing of the lyrics in what might be one of the most brilliant punk rock vocals in the history of man. Sure, it isn’t an exact cover, I mean I am 95% sure that Frank Sinatra never mentions killing a cat in his version of the song, but then again, maybe I’ve just missed that in the many times I’ve heard the Chairman sing it. However, Sid’s snarled voice that modulates from faux-lounge singer to a downright snarl that maxes out the microphones. Beyond anything you might be able to say about Never Mind the Bollocks…, “My Way” might capture the how Sid Vicious portion of the equation better than anything else in the Sex Pistols discography.

(P.S., I have no proof for this beyond my hunch, but is this the only Sex Pistols song with a string section? Weird.)