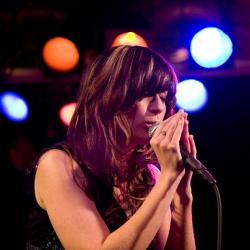 Opening for the Pipettes must be both a positive and a challenging opportunity. On the one hand, you’re playing to a somewhat big audience that will probably be hearing your music for the first time. On the other, nearly everyone there has fallen in love with Gwenno, Riot Becki, and/or Rosay and you’ll have the thankless task of filling time before they enter stage left.

Fortunately, Nicole Atkins and her band, the Sea, were not just filling time. Atkins rode in to town on her own considerable buzz, which includes an appearance on “Late Show with David Letterman” two nights earlier, a perfectly lovely American Express commercial, and a new record, Neptune City, which has received some pretty glowing reviews.

Playing songs mostly from Neptune City, Atkins charmed the sizeable Thursday night crowd at the Crocodile – even bringing several of her own fans out.

One of my de-lovely editors has already named 2007 the year of the chanteuse, with many female artists finding success and not being pigeonholed in to the singer/songwriter “girl with a guitar” crowd. Like Feist, Regina Spektor, and Amanda Palmer, Nicole Atkins transcends the Lilith Fair genre. She is equally comfortable rocking out behind power chords and reverb or singing sentimental, nostalgic ballads.

Armed with a remarkably strong voice with lots of range, Atkins and company put on quite an engaging set for her first trip to Seattle. She opened with “Maybe Tonight,” the first song off of Neptune City, but picked up the tempo quite a bit from the studio version on her album. It paid off because it was the first step toward winning over a crowd who was there to see a lively dance-pop band. When she is singing rock songs, Atkins sounds like she’s channeling Stevie Nicks, both vocally and with her considerable stage presence.

Not only did Atkins sound good, but she also had a very wicked sense of humor. When someone in the crowd shouted that they had seen her on Letterman she told us that the legendary talk show host invited her out for a steak after the show, but it never happened. She said she wondered if “getting a steak” means something entirely different than she thought. She also said she had gotten to meet Slash and played a joke at his expense. Since she heard he was on the wagon, she and her friends left an empty bottle of Jack Daniels in his dressing room so people who saw it thought he was drinking again. 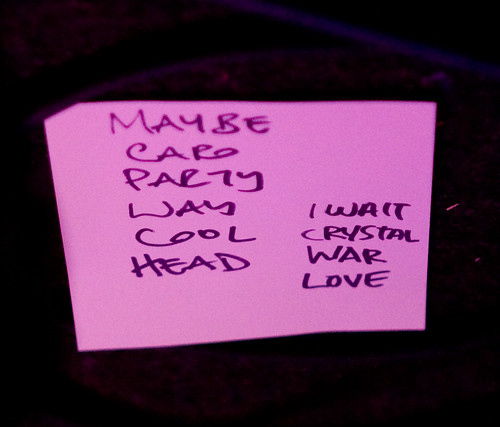 Nicole Atkins and the Sea played for about 50 minutes, and at times it seemed like there were even more people watching her set than watched the headlining Pipettes (this was an all-ages show and the 21+ section definitely had quite a few more people in it for Atkins than the Pipettes). She played ten songs total, including a cover of the Doors’ “The Crystal Ship.” She surely brought quite a few fans to the show but I would not be the least bit surprised if she left with many, many more.