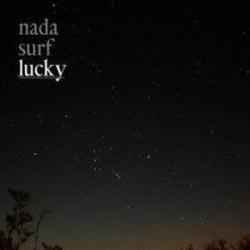 Ah, Nada Surf: the archetype of a “grower” in music. As a band, they grow on you—fast or slow, it doesn’t matter, they’ll get you—and, with the exception of that single “Popular” from their debut High/Low in 1996 (which, like so much music, only gets worse with time) each of their records since 1998’s The Proximity Effect has possessed that rare and eerie quality of only getting better with familiarity.

Lucky does not stray from the formula. From its oh-so-Nada Surf first single “See These Bones,” (see the download link below) to a tastefully crescendo-ing finale on “Film Did Not Go Round,” Matthew Caws and company have just delivered the best work of their career (until their next record, I guess).

As, quite frankly, should be expected. The trio of Caws, Ira Elliot, and Daniel Lorca have been playing together for a dozen years or more, and as a “grower” band they’re musicianship and songwriting continually matures and progresses such that, with Lucky, we’re hearing a band at the top of its powers. And they’re clearly loving it:

“Beautiful beat, get me out of this mess / beautiful beat, lift me up from distress,” goes the harmonized refrain in the jangly, power popper “Beautiful Beat.” That refrain could be the soundtrack to any of life’s everyday climaxes, and like so much on Lucky, it succeeds in transcending the muck of love-songs and sad-songs that makes up the bulk of popular music, capturing simply that joy of listening and letting the “beautiful beat” bring comfort. (That said, the end of the song brings this lyric: “I believe our love can save me, I have to believe that it can.” Somehow, though, the sentiment is delivered with sincerity. Perhaps it’s the selfish undertone to “our love” saving “me.” Regardless—the song’s got a killer beat.)

Overall, Lucky most resembles 2002’s Let Go in substance and in style. Like that excellent record (which, for the most part, reminded listeners Nada Surf existed) Lucky has its rockier songs and its softer songs, but the terrain balances itself such that it can be called an “album,” as opposed to “CD,” (on which songs are simply collected). In the age of iPods, be thankful for that.

Rocker “Weightless” might be the rock-and-roll-ing transition out of "The Weight" is a "Gift’s" more melancholy moments, but the later “I Like What You Say” deserves mention as truly the most joyful moment. Accompanying bright acoustic guitars and sailing harmonies, Caws delivers the refrain: “They say I have to have somebody, they save I have to be someone / They say ‘if you’re not lonely alone, boy there is something wrong!’” But this is countered with the ever-hopeful and jubilant: “But I like what you say, I like what you say / You say, “Baby, I only want to make you happy.”

And really, that seems to be what Nada Surf accomplishes with their music: It grows on you, and in doing so becomes more personal, more of a companion that only wants to make us happy, even if it makes us a little sad sometimes (see the pretty melancholy of “Film Did Not Go Round” or the just plaing desperation of “Who’s Authority”). “Beautiful Beat,” though, may very well bring us out of a funk in our rainy work days, just as “I Like What You Say” may very well bring a bit of sunlight into otherwise fluorescent relationships.