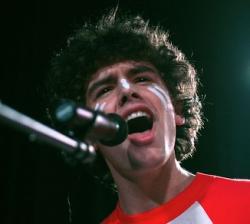 …the Fire Department showed up!

After waking up at 7am the morning of this show, commuting from Federal Way to Bothell and the back to Seattle, and then taking over 30 minutes to find a parking spot, I was in a bitchy mood and didn’t think I was going to enjoy it. Luckily Natalie Portman's Shaved Head rocked my pants off.

I doubt the Vera has seen such a turn out (except for Band of Horses). As I waited in the front with some fellow show goers, I see the rad set up for Seattle band Sleepy Eyes of Death. From fog machines to their own light technician, it was BAD ass… but little did we know it’d turn into a PAIN in the ass. The lights dimmed, the youthful crowd gathered, and the band appeared with a cloud of fog and lights flashing. Before they even introduced themselves, the fire alarm went off. Everyone was confused as to whether or not we leave or just wait. Apparently, the fog machine set off the alarm and everyone had to be evacuated and wait for the fire department to complete an inspection. Can’t say in my experiences of going to shows that has something like that happened! At least one of the firemen wasn’t bad looking.

Finally after the inspection was complete, everyone let back in, and after a recheck of the equipment, the show began. Their set consisted of two songs and giggling kiddos. I’d say even though I only got to listen to two songs, they were pretty good, somewhat Daft Punk without the euro hotness. Still, some hotness involved.

Wesafari had some serious act to follow. The firetruck rocked the Vera! I really enjoyed their mellow yet electro feeling. And the name is freaking awesome!

And then, ahhh Natalie Portman's Shaved Head! Their performances get more and more complex every time I see them. The hollering started as soon as the capped crusaders stepped on stage.

You know it’s a captivating show when the photographer runs out of memory card space trying to capture all the amazing moments. From hip breaking beats (or at least bruising… I felt it the next day) to their colorful hip, fringe accented outfits, I haven’t seen such a young band rock out so furiously all throughout their set. The show was the epitome of a dance club (but without the chicken hawks and prostitutes). NPSH pranced around with sexy beats, and the crowd jumped and waved their hands, hoping to meet their level of excitement.

Unfortunately this is the band's final performance for a few months. But! A new album has been promised. Like their outfits, they have a bright future, and I for one can't wait to greet it.