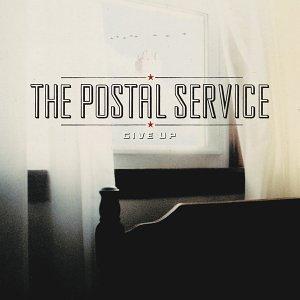 "Natural Anthem" by The Postal Service

Yum. The Postal Service for breakfast. I'm digging it. I think I probably melted my copy of Give Up by playing it too many times, but I tell you what, I never got sick of it. I believe it is one of the most important albums of this decade so far, and though I'm excited for more music from them if and when another album is released (which, by most accounts, seems nigh), I also kind of wish they would leave it be, so that we can all have this one perfect band to breathe in and out without any chance of pollution. "Natural Anthem" is somewhat of an anomaly within the album, considering that it spends four minutes building up an electro-instrumental supercharging melody before Ben Gibbard's vocals kick in. The lyrics are short, sweet, to the point, in true BG fashion: "I'll write you a song and it won't be hard to sing It will be a natural anthem, familiar it will seem It will rally all the workers on strike for better pay And its chorus will resound and boost morale throughout the day I'll write you a song and I hope that you won't mind Because all the names and places I have taken from real life So please don't be upset at this portrait that I paint It may be a little biased, but at least I spelled your name right…" Mmmmm, yes, delightful. I think I'll put Give Up on repeat for the rest of the day. Incidentally, the very next song my iPod played was "Wires and Waves" by my most favoritist band, Rilo Kiley. Oh iPod, be still my heart.