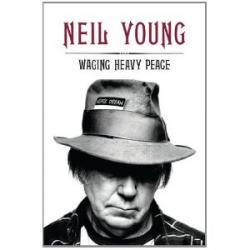 Even though he’s not from around here, it would be hard to name any single person who has had more influence on Seattle’s indie music than Neil Young. From Pearl Jam to Fleet Foxes and just about everyone in between, Seattle owes a pretty big debt to the fiercely independent folk-jam rocker. This year is shaping up to be a pretty good time to celebrate that influence. Neil Young released his 34th full length album, Americana, in June (his first with Crazy Horse since 2004) and will play KeyArena on November 10 (tickets are pricey, but still available). On October 2, Young will drop his memoir Waging Heavy Peace.

I read a preview chapter from Waging Heavy Peace, which the publishers are billing as “the only advance taste of Neil Young’s memoir.” It’s only a few pages, but it’s enough to let you know that this is not going to be a linear autobiography. You would hardly expect one from the guy whose label once sued him for making music “unrepresentative of himself.” He is rightly famous for wandering jams and blues-rock anthems, but his catalog includes country albums, and he has experimented with jazz and horn sections. Now Young has released an album of kindergarten-folk covers (his words). Young has always marched to his own beat, inviting the rest of the world to follow or get out of the way.

In Waging Heavy Peace, Young is like a cool, old black-sheep uncle inviting you to kick back on the front porch on a summer evening with a cold beer, while watching the sun set and telling old stories. The preview chapter wanders like one of Young’s guitar solos, rambling from his model train collection, through David Crosby’s freebase addiction and relationship with Graham Nash, to the timeless beauty of the 1953 Buick Skylark, the Vietnam vet he hired to take care of his classic car collection, the barn that houses the collection and his business offices – all of which is just to introduce his obsession with sound quality and the evils of the mp3. Because you see, Young has an idea for a new technology that will pair the sound quality of vinyl with the convenience of mp3s. His is a storytelling style my mom (herself a huge Neil Young fan) calls “going down around Nellie’s barn.”

If you’re a music trivia freak looking for a comprehensive life story full of chronologically ordered details about Buffalo Springfield; Crosby, Stills, Nash and Young; and Crazy Horse, this book will drive you crazy. If you’ve ever wanted to kick back and shoot the shit with one of the greatest musicians of the last century, this is your chance.

{Waging Heavy Peace will be released October 2 from Blue Rider Press. It is available for preorder from Amazon now. Neil Young and Crazy Horse will be at KeyArena November 10. Prices vary.}