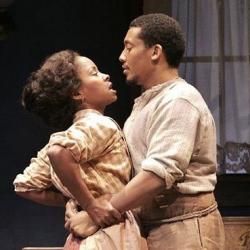 Giving a so-so review can really be a bummer. I was all set to love me some Gem of the Ocean, the Rep's new mounting of the first installment of August Wilson's legendary ten-drama cycle on African-American life in the 20th century, directed by Phylicia Rashad. It was one of three plays I saw in recent weeks, and given its pedigree it could have been the best of the bunch. But it wasn't.

The story takes place in 1904 in the Pittsburgh home of a 285-year-old matriarch and slavery survivor named Aunt Ester (Michele Shay). Living with her are Black Mary (Crystal Fox), her longsuffering housekeeper and heiress apparent; Eli (Allie Woods), a mumbly, stubborn man who we never learn much about; and, eventually, a guilt-ridden drifter named Citizen Barlow (Khalil Kain), who seeks to have Ester "wash his soul clean" following his involvement in a recent killing. Dropping by to visit are Ester's crafty pal Solly Two Kings (William Hall Jr.), preparing for a trip to his native Alabama to save his sister from servitude, and Black Mary's horrible brother Caesar (Stanley Wayne Mathis), a local "boss man" who identifies more with his own people's subjugators than their liberators.

There are definitely things to love about Gem — mainly the impeccable performances by Shay and Fox, both utterly brilliant (and very nearly worth the time and ticket) at conveying the wise and longsuffering spirits of their characters. Visuals are stunning, too (par for the Rep's course): Susan E. Mickey (costumes), John Iacovelli (sets) and Allen Lee Hughes (lights) are all to be commended. It's just a shame that the gorgeous speechifying and allegorical themes characteristic of Wilson's awe-inspiring work weren't handled with more care — as presented here, they're uneven, more boring than they should be, and occasionally (dare I say it?) sitcommy.

Thinking back, and given Gem's immense potential, maybe my expectations were too lofty. The opening night audience loved it, and many other local reviewers are lavishing praise on the production left and right. Still, you'd think my standing right next to Clair Huxtable herself in the post-play-reception dessert line would have prompted a bit more internal camaraderie with her directorial debut. Sadly, it didn't.

I can say without question, though, that disliking the touring Broadway version of The Light in the Piazza, now playing at the Paramount, had nothing at all to do with high hopes. I wasn't a fan of this musical in its early local incarnation at the Intiman, and it would have taken a lot to convince me that it had improved since it became all famous, got a budget and a NYC run, and won all those accolades and awards. Well, aside from some ridiculously impressive sets and performances (from actors and musicians alike), I still find the new and unimproved version to be a contrived, frustrating snooze, with forgettable songs, a dumb plot, and some very unflattering assumptions about the intelligence of its audience. I didn't believe in Piazza then, and I don't now.

The story, if you must know, goes something like this. A well-to-do Southern American momma and 20something daughter are on vacation in Florence, Italy, in the early '50s. Out of nowhere, a handsome, English-challenged Italian suitor appears and falls in instant (and I mean instant!) love with the daughter, who, it turns out, is emotionally stunted as the result of a childhood accident — something that the stud and his wacky Italian family don't pick up on before they start planning the wedding. Should Momma come clean, or hope that her daughter's increasingly-evident eccentricities get lost in translation?

It's hard to care, because unless you're a fan of Harlequin novels you don't fall for the love-at-first-sight part for one second. It would be different if sexy-boy were running some mobster con on the ignorant Americans, but he's not. He's really in… love. And, oh my God, I mean crazy love. And don't try to tell me that "love is a fable" is the point of the story (it's the gist of one of the key songs), because I don't buy that either. Despite the spendid stage design and the strong acting (Christine Andreas really is good as the mom), The Light in the Piazza is just a pain in the ass to sit through. And my theater companion liked it even less than I did, going so far as to say, "I've got to get myself to a small theater, like soon, and see something raw and edgy to purge myself."

I concurred, and thank goodness I had opening night of Book-It's new adaptation of Ellen Gilchrist's Rhoda: A Life in Stories to look forward to later in the week. It's in no way edgy or raw, except in comparison to Piazza… and, even at probably 0.00000000002% of Piazza's budget, it's also a far superior piece of theater.

And the lion's share of praise has to go to the dramatic powerhouse (and Book-It co-artistic director) Jane Jones, who positively dazzles in the title role of Rhoda Katherine Manning. Based on short stories set from the 1940s through the '90s, the play chronicles the indomitable heroine's life adventures, from feisty and precocious 10-year-old through her final destination as an accomplished and introspective writer — much like Gilchrist herself, actually.

Jones was in the very first Book-It show I saw — 2001's Silver Water (another short-story mashup, that time from author Amy Bloom) — and the subtle details she's able to convey for complex, time-spanning characters is just marvelous. She's an electrifying performer who we just don't see enough of these days. Not to leave out the rest of the fine ensemble, especially Kelly Kitchens, who is fantastic as Rhoda's mother (in the early years) and a spectral vision of the same character (in the later ones).

Book-It collaborator Rachel Atkins (who also wrote the company's wonderful take on Rebecca in '05) adapted these Rhoda stories for the stage, and she gets major props for wrangling the material into such a funny, gripping, inspiring stage piece.

Good, challenging, original theater may be scarce these days, but once again Book-It reminds us of the boundless strengths and sublime possibilities of the medium.