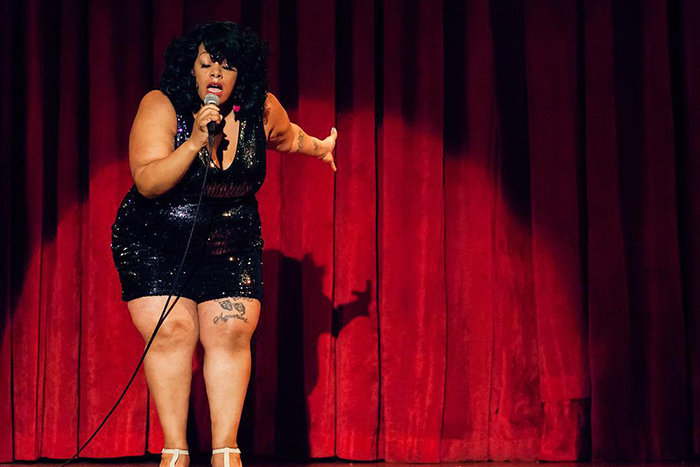 It’s Friday everyone, and that means we’re only a few days away from TIG’s 16th Birthday Party and NEW WAVE NIGHT! Today we’re shining the artist spotlight on one of Seattle’s most talented vocalists, a woman who needs no introduction, (but I’m doing it anyway,) Ms. Adra Boo!

Seattle may know Adra Boo best as one half of the funky, electric soul duo Fly Moon Royalty. They burst on the scene awhile back absolutely flooring audiences with their live performances. Mike Sylvester’s intricately layered synthy funk beats were the perfect compliment to Adra’s astounding voice. She channeled the greats like Aretha and Sharon Jones with lyrics that were fresh and dance moves for days! They disbanded a bit ago to work on new projects, but we still miss them like crazy. Here’s a few of my favorite Fly Moon tracks.

Adra recently embarked on a new endeavor, joining up with another Seattle band, Hotels. Their subtly surfy 80’s infused cinematic pop has been charming the city for ages and it’ll be interesting to hear how Adra’s rich vocals and creative influence move it forward. Watch a few songs from their recent KEXP in-studio below!

Don’t miss Adra Boo’s performance this Sunday at TIG’S NEW WAVE NIGHT. Seriously I’ve seen her in practice and they might be two of the best covers I’ve ever seen. JUST SAYIN. The live music starts right at 9pm on the dot so get there early! We’ll follow up the live music with all New Wave Karaoke and a New Wave Dance Party. Get dressed up in your best ’80s finery and join us!!