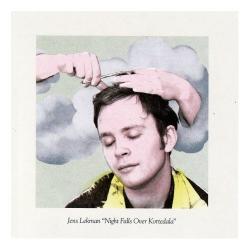 I’d be hard pressed to think of a performer I like better than Jens Lekman in modern rock today. Not only has he produced songs that are wonderful, but also he has a sincere charm that sets him apart from many of the singing and songwriting types that attract fans as Jens does. He understands the nature of music as entertainment, but that doesn’t stop him from putting heartfelt meaning in his songs as well. After a brief bout of righteous indignation with music (and a claim of retirement), Jens has returned to us with the gorgeous Night Falls Over Kortedala, an album that culls the last few years of recordings from the Swedish troubadour and he brought El Perro del Mar with him to help paint the sonic landscapes. You’re not likely to hear a better pop album in 2007 (or any year for that matter).

It has been a bit of challenge for me to think how to tackle a review of Night Falls Over Kortedala. The best I think I can do right now is try to explain the scenes that Jens is painting for every track on the disc. That might be the only way I can get across the sort of magic that occurs when you hear the songs. Really, it is that good.

Track 1: “And I Remember Every Kiss”
If Jens decided to write and star in his own musical, this could be the big opening number. It's packed wall to wall with orchestral flourish like we’ve never heard from Jens before, but one could imagine him walking down the street with his hands in his pocket singing until he’s suddenly transported to the ledge of a tall building, belting the words out over the city. Jens breaks out the lyrical chops early on: "Things get more complicated when you’re older/before you know it you are somebody’s soldier/you get a gun and you name it after a girlfriend."

Track 2: “Sipping on the Sweet Nectar”
It's a little hard to get the image from the proper video for this song out of my head when I hear it, but it might be because Jens chanced upon the perfect combination. The song itself is a tribute to late 70’s disco-pop-rock, sort of like Jens acknowledging the ABBA connection and oddly, Jens voice and lyrics work perfectly with the ridiculous ostentatious production. However, picturing Jens flying a little airplane over the Icelandic landscape meshes perfectly with the light and airy nature of the song.

Track 3: “The Opposite of Hallelujah”
Now, I hear the opening chords of this song and all I can think is putting a pompadour on Jens, giving him a leather jacket and plopping him down in a 50’s diner. It sounds like a song that might have come out of some time-altered jukebox where in this Swedish diner the kids are all dancing with the poodle skirts and wingtips to Jens’ crooning. I think this sensation is caused by the Motown/Phil Specter production to the song, as if Jens was really a white, Scandinavian Otis Redding.

Track 4: “A Postcard to Nina”
This song continues that Jens Lekman-meets-Motown sound, but more on the ballad side. Here, we find Jens lamenting to Nina from his car parked on the side of the road in the desert at night… and that the animals gather around him and start to sing backup for him when he lets the song break out. Yeah, that’s the ticket!

Track 5: “Into Eternity”
Here we find Jens venturing into the Graceland vibe that permeates the middle of the album (and if you’ve heard Jens’ “The Death of Summer” compilation track then you know why). The song is a great love song that is dominated by accordion in a clearly African rhythm. Even more so then “A Postcard to Nina,” Jens is begging for a guest spot on The Muppet Show circa 1980 as it is a perfect song for a bunch of anthropomorphic pigs playing tribal instruments.

Track 6: “I’m Leaving You Because I Don’t Love You”
There is a disconnect here between the obviously sad subject matter of the song and the music. The song itself has a bit of a dance beat intertwined with a playful piano line with Jens crooning "I’m sorry I couldn’t love you enough." Sounds like the sort of song that begs for flashbacks as Jens gets on a plane (or train, being Europe and all).

Track 7: “If I Could Cry (It Would Feel Like This)”
For some reason, I really like the idea of Jens leading some sort of ironic parade to this song. Maybe full of a bunch of very manly looking folks with tissues in their hands and a very dour marching band (likely made up of El Perro del Mar). Somebody give Spike Jonze a call.

Track 8: “Your Arms Around Me”
Jens has taken his website freebie and made it all “growed up” now. The original version (or demo version I suppose), one of my favorite Jens songs, is just Jens, his ukulele, and a home-recording unit. I’ve spent enough time imagining this song in my head that I already know that it needs to be a literal retelling of Jens slicing his finger off when his girlfriend sneaking up on him while he’s slicing an avocado. I’m slowly getting used to this fully produced version of the song and while I didn’t like it as much as the demo at first, I’m finding the charm in this almost Smith-like pop song.

Track 9: “Shirin”
This might be the only love song ever written about getting a haircut. Jens is at his most restrained production-wise, almost channeling, well, Chris Isaak on this one. I’m not sure if one can actually sing while getting a haircut without a severe loss of blood, but this one screams for a split-screen while Jens gets his haircut. I’m not sure what Jens means by "you’re a drop of blood in my glass of milk," but to him that is apparently a good thing. Maybe that got lost in translation.

Track 10: “It was a Strange Time in My Life”
During the gentle ballad of Night Falls Over Kortedala, I can imagine Jens frolicking in a woodland glen and hanging from each trees are pictures of his life. It's hard not to love it when Jens describes personal interactions like "her middle finger extended until its simple message could not be denied." Jens has some odd views about shy people (I’ll let you find out for yourself), but Jens wandering through a forest of his teenage years is the perfect match for the song. The trees can even sing along if they want.

Track 11: “Kanske Ar Jag Kar I Dig”
Jens suddenly finds himself trying to muscle into the Paul Simon/Billy Joel pop scene, with a bit of the Graceland sound with a doo-wop quartet backing his vocals. I suppose to most of you that might sound horrifying, but as with a lot of Jens, he’s able to meld it into something surprisingly refreshing and fun. This is song would work best by following someone through their day, maybe from a camera mounted directly in front of them, maybe like a friendly and nice version of Prodigy’s “Smack My Bitch Up.” Now, imagine that my friends. What sort of twist ending could be added here?

Track 12: “Fright Night at the Drive-In Bingo”
Easily the best song on Night Falls Over Kortedala. All we need here is Jens on a moped, quick edits in a Wes Anderson style, and a guy playing a saxophone showing up everywhere like Jonathan Richman in There’s Something About Mary. Jens is at his musical and lyrical best, combining a rollicking rhythm and melody with perfect sequences. The song picks up its pace in the middle and Jens delivers this wonderful description of his imagined life in the Swedish countryside:

Just hearing Jens deliver these lines, you realize that he’s in his absolute top form.

I’m not saying that Jens Lekman is the best songwriter in music today… OK, wait, that is exactly what I’m saying. That statement is probably infected with the hyperbolic excitement of getting an album full of new Lekman pop masterpieces, but honestly, the songs he crafts, although maybe not everyone’s cup of tea, are brilliant.

Night Falls Over Kortedala won’t make Jens a superstar, and really, would we want Jens to be a superstar? He’s not really built for that lifestyle. Instead, we can hope that Jens doesn’t get disillusioned again and he just keeps on recording sparkling albums that are the very worthy descendants of Chet Baker and the Modern Lovers.