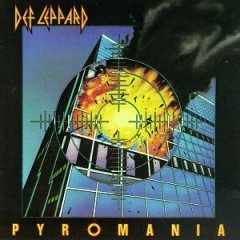 "No serenade, no fire brigade, just a Pyromania (c'mon)"

Last night I went to see my first film in the movie theater* in about six months (note: the last film I saw was For Your Consideration and I disliked it so much it's taken me this long to be willing to invest $9.50 and two hours yet again in a darkened public space). But I digress.

My point here is, we had about half an hour to roam Ballard pre-film, and while perusing the used CD bin** at Sonic Boom Records, I couldn't resisit picking up this gem….

It was also a childhood favorite of mine. And while it certainly sounds dated now (I made it halfway through track #6, "Foolin'" — also known as track one, side 2 — before turning it off during my sunny morning commute today), some of those tracks surely stand the test of time; most notably, I would still call "Photograph" a nearly perfect pop song.

Your mileage may vary.

* In case you were wondering, the film in question was Ratatouille, which was great (of course, Pixar is incredible). Though I must confess, I'm rat-averse — so when they scurried about onscreen (and especially in the kitchen scenes), my tummy still churned!!

** Speaking of the Sonic Boom Records used CD bin, who is the fool who sold back Liz Phair's Exile in Guyville and Miles Davis' A Kind of Blue? And the TWO copies of the Breeders Last Splash?? Abominations!!