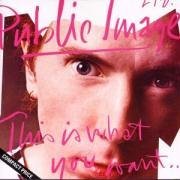 "This is Not a Love Song" by Public Image Ltd.

This is one of those songs that either you like it (where I fall) or you hate it with the fire of a thousand suns (where 99% of the people I know fall). Let's see, it's (a) highly repetitive; (b) features Johnny Lydon's nasal, whiny vocals; (c) kind of a weird disco-punk from the early 1980's. Not exactly middle America's cup of tea. "This is Not a Love Song" almost appears as a performance art piece disguised as music, making a statement about writing a song that isn't a love song, and making sure we know it's not a love song. It might sound a little dated these days, but when you listen to "This is Not a Love Song" in 2007, you begin to realize that lots of today's current dance rock bands owe a large debt to Public Image Ltd. Heck, PiL practically invented the genre after the demise of the Sex Pistols allowed Johnny to combine punk & dance into a gooey mess. Listen to pretty much anything by the Rapture and what do you get? Whiny vocals, guitars and dance beats, repetitive lyrics. For that, Johnny Lydon can know that no matter how much his talk shows fail or his unpleasant Sex Pistols reunion tours might offend, PiL will live in on all these bands.

{iPod Roulette is a daily feature from TIG writer Erik Gonzalez, where he highlights the first track his 11,400 track iPod picks for each day. Think of it as your imaginary daily affirmation.}