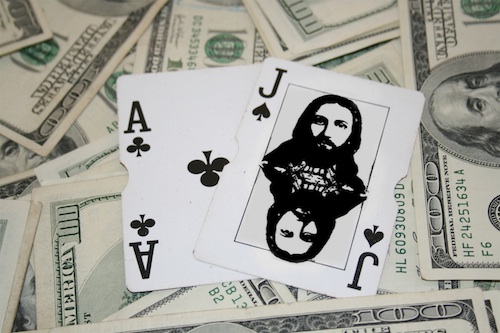 Now streaming: Card Counting Christians {on DVD and On Demand}

One of the more interesting documentaries I saw at SIFF last year, Holy Rollers: The True Story of Card Counting Christians, has been picked up by Warners Bros.  and is now streaming on VOD, iTunes, Amazon, YouTube – and a few other places! It's also available on DVD, which you can order from the website. It's really kind of an incredible story, and I have to credit Tennis Pro's David Drury for bringing it to my attention during the fest (he has a small'ish part in the film, and continues to tell me hilarious stories of his Casino adventures).

The gist of how I feel about the film as a whole is that most of the people profiled are total jerks, but it's still a fascinating thing to watch. I went in thinking it was about one thing, and left knowing that I was completely and totally wrong. If you're more like me, you'll still appreciate it – if you're more like Imaginary Embracey ("I wish this movie had been the length of a Big Love episode. An hour with its d*baggy subjects is PLENTY.") – well, you might want to throw stuff at the screen. Or throw up. Or both.

Watch it and let us know how you feel!