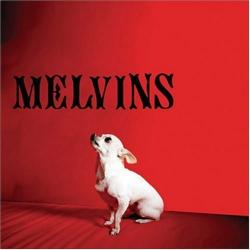 The Melvins are an institution of weirdness. They’ve been around forever now, since 1983, I believe, that’s forever in dog years, right? Right.

The band is more or less comprised of guitarist/vocalist Buzz Osborne, drummer Dale Crover and a random third member. Over the years, the band’s membership has been in flux, the inconsistent piece being the bass player. For whatever reason, the Melvins seem incapable of holding onto a bass player for more than a few years at a time, and they’ve got quite a few ex-members. The most recent departure was Kevin Rutmanis, also of The Cows and Tomahawk, who was booted out of the band for drug use, supposedly. This left Buzz and Dale in a quandary: what to do next, right? Being a Sludge Metal band, it seemed important to have a bass player to provide a weighty end to the music. But as long as they’re getting a new bass player, they thought, why not get another drummer as well.

So began the latest era of Melvimania, the era of the double drums of peace. The new members come in the form of Coady Willis (drums) and Jared Warren (bass) of low-end Assault Metal duo Big Business. Incorporating Big Business into their band was the best decision that Osborne and Crover have made in years as these two young bucks decisively augmented their already impressive sound. They’ve since released two albums with this new configuration, the supremely awesome (A) Senile Animal and the supremely bizarre Nude With Boots. We’re here to talk about the second one.

Nude With Boots is the latest release by the Melvins and it shows them to still be a powerhouse of Sludgy glory, a swamp beast from deep within the bog, come to ooze it’s way out onto civilization and take us back to a time when all that mattered was that your guitar could riff and your drums could pound. There is a sort of primal simplicity to their music and it doesn’t need to be complicated to be good.

The Melvins are very technically proficient though, as is evident in the dueling drums of Crover and Warren. The pounding fury they generate is dynamic and potent, each one augmenting the other with their banging battery. The Melvins are one of those bands where you can actually hear the double drum sound, especially in the bass drums, which rumble and roll like nothing else.

Besides the drumming, the most recognizable aspect of the Melvins music is Buzz Osborne’s booming vocals. Melvins lyrics rarely if never make sense but, boy, do they take up space in the mix. On this album, like the last one, Osborne’s deep, resonant bellow is backed by each other member of the band, quadrupling the effect and giving the weighty vocals even more girth. But a Melvins album wouldn’t be complete without the raging riffage created by Osborne’s guitar. It’s grungy but not dated, hardcore with more then three chords and it solos something fierce, but not in that masturbatory, egotistical way. Without it, the Melvins wouldn’t have a prayer.

The Melvins are not a Grunge or Hardcore band though, and Nude With Boots is considerably more jammy than (A) Senile Animal was. With (A) Senile Animal, each song had a very tight structure and that was only broken for the ends of songs in which almost every track dissolved into a drum battle between Warren and Crover. But Nude With Boots is different, looser in many circumstances and with less of the grounded feel than it’s predecessor possessed.

The jammyest track is probably the upbeat “Suicide In Progress” which begins life as… well… a jam, before changing tracks and devolving into the Melvins version of haunting minimalism, complete with Osborne intoning dark remarks about “little animals floating in the air”. The whole album has a more energetic (almost weirdly happy) atmosphere that has previously been unheard in their music. It contrasts starkly when weighed against other pieces of their work, especially the dark Pigs Of The Roman Empire, which was just about as menacing as you can get with the Melvins.

The finest moment on Nude With Boots comes with the thunderous screamer “The Smiling Cobra” which contains the chorus “There is no ending! And there’s no wonder why!!” which could very well be the finest description of the Melvins I’ve ever heard. Nude With Boots is an excellent continuation of the wonderful strangeness that is the Melvins, if you’re already a fan, you’ll love it. If you’ve never heard them before, it’s an excellent blend of their straight-ahead Sludge Rock and odder, more experimental fare.