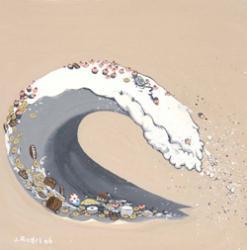 There are moments in one's life where you have an opinion and you stick to it, right or wrong. "I do not like broccoli," you say. Then, at some dinner party, you eat something. "What was that?! It's delicious!" "Broccoli casserole," is the answer and then you shudder happily. "Wow! Broccoli!" "I will never visit Oregon," you might say to yourself. "I hate Oregon." Then you have a two day layover in Portland and you wander the streets. "Wow! Portland! This is great and these Voodoo Donuts are amazing!" What's all this have to do with the Seattle-based band The Black Swedes? "I do not like intimate lush songwriting, Ryan Adams, Elliot Smith-y songs. String arrangements – uck!" Then you listen to their new LP, Tempest. "Hmmm…this isn't bad. This is good. Who is it?!" The Black Swedes, an acoustic folk-rock duo who know what they're doing.

Frontman Ian Bell and guitartist Matt Benham (coming from the bands Argo and Sea.mine) have already made some waves with the group. They were on MTV's Real World soundtrack and KMTT 103.7 named them "Band of the Month." They were a finalist in the Red Hook Emerging Music Awards and they're emerging with sophisticated songwriting without use of a drummer, barely noticed with the waves of orchestration, the melodies intricate and balanced, the album self-assured and honest.

"I Would Only Love You More" starts like a rich concerto in a concert hall, a melancholic cello echoing out before guitar plucks and strums. "I would only love you more the longer you ignore my needs," it begins, sadly, forlonrly, sung by a man who has seemingly already lost the battle though forges ahead in song and lyric, melody and rhythm.

Moody and melancholic, yet catchy, the Black Swedes are bound to make more converts, even for those who hate Oregon and refuse to eat broccoli.