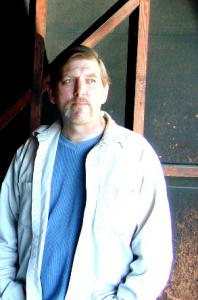 I must confess straight out that as of the time of this publication, David Freel — guitarist, keyboardist, vocalist and superstar from the lovely band Swell — and I had not met for coffee.

David, you are owed an imaginary coffee for your efforts.

For those of you not familiar with Swell, they have just unleased their seventh album, “Whenever You’re Ready” and have an extensive history, beginning in the mid-1980’s when David got a check from the Mason’s after his grandfather passed away and used it to buy a Tascam 1/2″ 8 track tape recorder. Cool, eh?

So without further ado, our imaginary chat with Mister David Freel!!

Let’s jump right in with a hard-hitting question: what is your favorite coffee beverage, and where do you like to get it around Seattle?
My favorite is the Vietnamese coffee that is put on your table with that metal dealy poised on top of the glass and the coffee actually brewing and dripping into the condensed milk and ice below. I had it here in Seattle once, except they did the brew part ‘backstage’ — not as entertaining — it was across the street from Gorditos in Ballard.

Your band name is both a verb and an adjective. Was this by design? The two meanings I like are the way Frank Sinatra used it — (swell!) — and the modern ironic usage as in ‘oh swell…someone stole my car battery again.’ As for the verb, I pretty much ignore it — except my ‘favourite bands on one bill’ combo was when we played with Nada Surf (in Valencia, Spain).

Are you a fan of karaoke? If you had to karaoke a song for Valentine’s Day, which would it be, and why?
Never done it. Looks like it might be fun after a few shots of Tequila — I would do that ‘all i need is the air that i breathe (and to love you)’ song — that can’t be the real title, it’s too long… Anyways, I think the Hollies did it back in the seventies and I really like the chord progression and just think it’s an effing great pop song and it’s a love song and it has the lyric, “No cigarettes, no sleep, no light, no sound…Can’t think of anything I need…”

Have you ever been stalked by a superfan? What’s the strangest thing a fan has ever done to get your attention?
The only sort of stalker/uberfan I can remember explained her everpresent presence by telling us she was doing a story on Swell for a European paper — but since I wasn’t responding the right way to her questions, she wrote some very unpleasant things concerning my ‘alleged’ recreational drug use, which brought on some embarrassing and unwanted attention from certain officials in certain countries who stamp your passports and go through your underwear…

What music is pulling your ears these days? What are you playing in your tour van?
I think we will be playing alot of Grandaddy — and Steppenwolf of course — and the Flaming Lips — and I never heard Heather Duby’s new album til just a few weeks ago but I’ve been playing a couple of the tracks on it over and over like an obsessive twelve year old (sounds like a plug for the show but I swear it ain’t!) — and I just heard Death Cab and have that song about the Atlantic Ocean on repeat also…

You guys are going all over the US on your upcoming tour.. what segmet of it are you most looking forward too?
New York will be nice because we get to stay there a few days and the Mercury Lounge has always been fun. Otherwise I’m looking forward to places I’ve never been to like Jackson Mississippi, Lincoln NE, Arlington VA, and Wilmington NC… well shit… the truth is, I’ve got such severe wanderlust that I want to go everywhere and anywhere…

What’s better in the tour van: twinkies or trail mix?
Twinkies — they last longer — they look fragile, but are surprisingly hearty.

Anything else you think your imaginary friends should know about Swell at this moment?
We are movie stars and are very rich, talented, and foxy…(see photos).