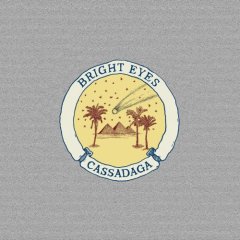 Only seven days until the official release of the new Bright Eyes' album (Cassadaga)!

Last week I explained why folks should pre-order the album from the Saddle Creek Cassadega webpage so that they can get a bonus cd/7", access some cool new mp3s and videos, and get the album early (since the label started mailing pre-orders out last week). Fingers crossed, mine should be here tomorrow!

Warning to those who cross paths with me: once Cassadaga arrives I'll be able to wax subjective about which song is the break out hit, which one should be on a mix tape to your childhood best friend and I'll quote lyrics in lieu of answering your questions.

Also of note: the countdown to the Bright Eyes show at the Paramount is now at 28 days. The last Bright Eyes show (in March) was one of my favorite nights of Q1, 2007. Get your tickets now!

And while we're talking about new releases… has anyone cracked open the new Jarvis Cocker album or the new Idlewild album? (It is Imaginary Idlewild Day after all!) They were released in the UK a while ago, but both of those albums are being released in the US today! The nerve of the universe releasing all these great albums within a week of each other. I guess there had to be some intervening force to break my Matt & Kim / Fratellis habit.