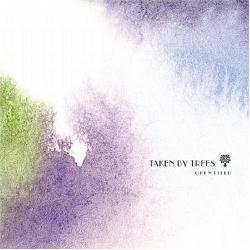 Concretes vocalist Victoria Bergsman wasted little time in venturing out on her own once she decided break away from the band. Taken by Trees is the name of her new ensemble, which is essentially a solo venture.

When Bergsman left the Concretes, she suggested that the group had lost its playfulness. This is somewhat ironic, because Open Field is a sparse and plaintive album all the way through, a stripped-down recording that sounds true to the image suggested by the title.

It was recorded in just six days and the overall sound is extremely simple and unadorned. Her resonant vocals take center stage here, leaving the music as a subtle accompaniment. In the press release, Victoria states that the main approach was "To see how my voice can stand almost alone." Bjorn Yttling (Peter, Bjorn and John) assists on many of the album's tracks, in addition to writing the string arrangements.

The songs on Open Field are erected from the vocal harmonies, and basic instrumentation was added as an afterthought to bolster Bergsman's voice where needed. Stark Velvet Underground-like percussion appears on a lot of tracks such as "The Legend" and "Hours Pass Like Centuries," which features a repetitive piano line with gentle melody echoes in the distance. Her voice leads this song, buttressed by soft yet strong accompaniment vocals. "Tell Me" is a quiet acoustic guitar melody, including some of that aforementioned percussion that participates from afar in the mix. The ambience of "Too Young" works best. Washes of droning keyboards linger like dying sirens from well behind the vocals until midway through the song, when drums and some classical-sounding piano take over and finish out the track instrumentally.

Open Field sounds like a very personal record for Victoria Bergsman. The plain and bare simplicity of the recording sets it apart from The Concretes as she is now exploring a distanced singer-songwriter phase with the composition and performance on this album.