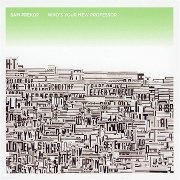 Who's Your New Professor?

Picture yourself in a lonely studio apartment on the top floor of a five-story apartment building. Four floors down is a wine store. Next to that is a falafel restaurant. It is night.

Picture yourself getting home from work. You sit at a small, wobbly table. You turn on music. Your only piece of furniture besides the table is an unmatched mattress and box spring.

There are records for every situation. Some records are best for driving, some for sitting on a beach, some for seduction-by-raising-a-stereo-over-one's-head. Sam Prekop's new record Who's Your New Professor? is for sitting quietly alone, eating canned soup and reading trade paperbacks. It is a summer-chill record, composed of clean electric, jazz-infused pop, and soft tenor vocals. Occasional instrumentals, like traffic signal patterns down long, nighttime avenues, blip and blop in smooth bottled-water refreshment. Think of a cross between Tortoise and Medeski, Martin & Wood.

Known better, perhaps, as captain of Chicago's fantabulous Sea and Cake, Who's Your New Professor? is Prekop's second solo full-length for Thrill Jockey Records. At once as experimentally slick and confident as Sea and Cake, Prekop strays only in that the songs are less electronically driven as they are by guitar. But let's not forget that Sea and Cake is Prekop's baby, and there is little difference to be drawn between Who's Your New Professor? and Sea and Cake's 2003 record, One Bedroom. Electronics and guitars swirl about Prekop's soft tenor in a hypnosis of solitary springtime breeze.

The record opens with "Something," a track driven by an elliptical guitar line and a sense of swaying back and forth. A cornet appears toward the end, adding to the sense of false contentedness Prekop conjures in the line, "There's no reason/ another something won't cross our minds together/ we're a standing mystery."

False contentedness is the convincing one does when one returns home from a job in which they lack passion, desire, hope. One eats soup straight from a pot with one's only spoon, bought for a quarter at a Salvation Army. In this life, Sam Prekop has a place.