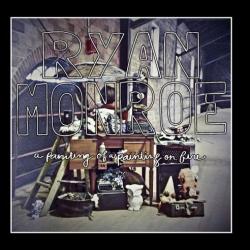 Ryan Monroe may be a member of Band of Horses, but his solo album A Painting of a Painting on Fire is decidedly not a BoH album. To strengthen that point, the album opens with a Rush-ish rocker so layered, so textured, so loaded that it's almost cluttered. Monroe comes charging out of the gate as though he has something he must get out of his system. So drastic is the departure from what I expected, I actually doublechecked to make sure I was listening to the right album.

It's not until track four, "Turning Over Leaves," that the album turns its own leaf, morphing into something closer to BoH. Here, a few songs in, Monroe seems more comfortable acknowledging his roots and lays out two killer summertime roadtrip songs in a row. "Turning Over Leaves" emulates BoH's style – in fact, it nearly lifts the driving intro of "Dilly" (off the Horses' last effort, Infinite Arms), albeit a few notches slower on the metronome. Still, it's a steady pop song, perfect for whiskey-soaked summer evenings that stretch into fall. "Blame the Daylight,” which follows, continues the country-road ride.

As the album continues, more of Monroe's influences seep through – those inevitable Joe Walsh vocal comparisons you’ll hear are apt. There are strains of Wings in "Shadow in the Shade" followed by twinges of the Bee Gees and an outright ELO lovefest in "Any Way, Shape or Deformity." None of this is bad; it's just, perhaps, a bit… bland.

Of note: Monroe plays every single note on this album. This is a feat – putting Monroe’s A Painting in the ranks alongside Dave Grohl’s Foo Fighters as a possible answer to some future music-trivia question about artists who wrote and performed their entire weighty debut albums.