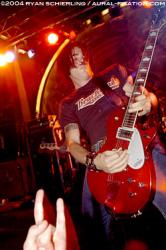 The Pale and The Last Call Romeos {Jet City Fix}

Far more interesting though, is that musically, the performances by the Pale and the Last Call Romeos were also a bridging of the gap, given the two bands' aiding in the evolution of two alternative genres.

The Last Call Romeos, a mixture of the neo-garage sound (ala the Hives, Jet) and 80s hair metal (i.e. Guns and Roses), sandwiched well with The Pale, members of the current reflective indie-pop uprising (think early U2 with a bit of Ben Folds smart keyboarding meets that good 2% of Coldplay, so says igLiz).

The Last Call Romeos (more commonly known as Jet City Fix) came out to a barren room, but one that filled quickly, probably due to the band's intense energy on stage. Clearly into their own music, they're not ones to stand around and gaze out into nothingness — they rock hard. The band thrives when they showcase their big booming choruses, which each time revert back to a classic (and very catchy) riff of a verse.

Details, details… whatever their moniker, the four piece dished out a 45-minute set, complete with lots of microphone twirling, drum stick tossing and head banging. With each song, it was as if someone was speeding up the record player, faster and faster.

As the Jet City, err, Romeos disembarked, so too did many of their hard-rocking fans. The empty space was gradually filled by the sweet floor-tapping, head boppers that embrace the Pale.

The band began with the keyboard-laden "Big Dumb Smile" off of their latest, Gravity Gets Things Done. The first three songs kept up a pace that soothed the transition between the formerly-mentioned Tacoma rockers. But The Pale truly showed their most gifted side when they slowed things down, namely on "Stop/Start," the first track on Gravity Gets Things Done. Nearly a shoegazer in its origins with echoing and pingy keyboards and guitar riffs, the song gained intensity — but not speed — as it wandered along for over eight minutes. Greg Swinehart ended the song with a blaze of glory. His joyful pounding of the drum skins was a highlight of the night.

Through the show, The Pale's mixing of speeds in its craft became more apparent as an asset to the band. The speedier the tempo, the more catchy the song. The more downshifted the tone, the more evocative they were. This was especially evident in the final song of their 9-song set. It was a new song that was nearly reminiscent of My Bloody Valentine.

All in all, I left with an insight into two distinctly different repertoires, but both are on the frontlines of developing a sound that's a little different than the ones we've heard before.