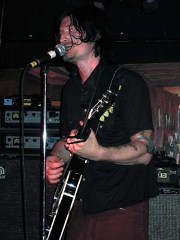 "Preternatural." Isn't that just fun to say? Preternatural. According to my favorite website, Dictionary.com, the word means…

Now as we all know, nights spent at shows can excite, deafen, delight, inebriate, amuse, bedazzle, transcend, and entertain. But how often can one say that a night out offered something, "Surpassing the normal or usual… uncommon, extraordinary…?"

This was just one Saturday night at the Sunset to some. But for me, I need this very large word p-r-e-t-e-r-n-a-t-u-r-a-l with its myriad of definitions to explain it.

"Unexpected"
It's not that Graig Markel or his music were peculiar in any way. It was just that… well, I sadly must confess that prior to this eeriest of evenings, I had name recognition-only for this local artist, and I'd always envisioned him as one of those "I'm- so- sad- sensitive- painfully- talented- singer- songwriter- acoustic-guitar" types. I pictured him a bit pudgy and a bit crunchy, and perhaps, {should I admit this? Oh, sure I should} a wee bit whiny.

Who knew that he's hot in a Bono-meets-Elliot Smith sorta way, and talented in a he-makes-the-ladies-swoon way, especially when he unabashedly sings, "You're My Wings," from the crowd-favorite closing song of the night, "Wings."

Graig's show featured reverberating male harmonies and soaring {electric, not sensitive-acoustic} guitars solos that wailed through his super-melodic, lyrically-focused songs. I bet his powerful and clear voice could have shattered glass as well as hearts, if properly motivated.

Next up we had Robert Roth, another fine local musician on another fine local label {Pattern 25}. Roth's set tickled me with its staggering array of musical influences. One minute I was enjoying the full and sonic, guitar-driven rock, feeling the beauty of his old wave influences, and then the next moment, we're suddenly psychedelia — we've gone all Pink Floyd. Soon thereafter, I swear it sounded very much like "Smoke on the Water," though Roth's grind burned more like the remnants of whiskey than of fire. "What's going on with me?" I wondered, alarmed, giggly, bemused. Was this because of the outrageous heat? {We were suffering a full-on heat wave in Seattle.} Did the two sips I took of "The Champagne of Beers" — anyone who knows me knows I loathe beer — in a desperate attempt to cool off, impact my aural perceptions? Or was it the sheer lack of Absolut Mandrin in my system at the beer-only Sunset Tavern?

Surely it was something external. How could I not be tripping out when listening to a performance that I swear sounded alternately like Deep Purple, Blue Oyster Cult, the Church, the Psychedelic Furs, and Rik Derringer? Lordy mamma, what to do? What music writer in her right-write mind could make a statement like that and expect to be taken seriously?

I went soaring through the decades, so many influences, man, like I was on this weird nostalgia trip. It was so hot. Remember that childhood video to Puff the Magic Dragon, with little Jackie Draper? When Jackie Draper is sad so Puff the Magic Dragon turns him a paper boy {an imaginary boy?} who they cleverly dub Jackie Paper and they fly away through all these adventures together? Did that plot even make sense?

{Then I recalled my personal childhood trauma, when forced to go to Hebrew school and learn a new song called "Puff the Kosher Dragon." Did that really happen? Or was the night getting so weird I was hallucinating? I told my date about it and he laughed. He didn't believe me. So I sang it to him: "Puff the Kosher Dragon, lived in Palestine. And frolicked in the synagogue, and drank some kosher wine." I couldn't be making this up! Surely this came from a brain far sicker than mine! Thank God {sorry, G-d} for the Internet to prove that I am not crazy! Look!}

Anyhow, that's how I felt with Robert Roth. No, not trapped in bizarro-land religious school, but rather soaring through the musical eras and influences in a swirly, psychedelic, erratic soup.

While I've let you know about Robert deliciously plodding through his dark pop melodies, I'd be remiss not to mention that Robert himself has had quite the emeritus musical history… from founding early 1990's Sub Pop/Capitol Records band Truly to collaborating with the likes of Built to Spill and author/musician Jim Carroll. He even auditioned to play guitar with Nirvana back in the day.

My personal theory? My inexplicable mental ramblings resulted from the energy of Roth's exhaustive list of both musical influences and pasts, all trying to cram into the lovey little Sunset Tavern. Robert Roth was simply too big for the room…

"Beyond or different from what is natural, or according to the regular course of things, but not clearly supernatural or miraculous"

Imagine if the Vampire Lestat encountered Johnny Rotten, Michael Stipe, Mick Jagger one aphotic, auspicious night, and gorged on their best attributes: Johnny's blasting vocals, Michael's quirkiness and cheekbones, and Mick's confounding charisma. Ahh, such a delicious vermillion feast that would be!

If such a bloody banquet occurred, the result just might be Pleasure Club. New Orleans obviously permeates Pleasure Club's breed of punk rock, as it's gorgeous and obviously Euro-inspired (in their case, early Brit punk rock). But like the Big Easy, it's deliciously seedier than its Euro-counterpart. It's sumptuous as the sweltering South; it's a little dangerous as its death and darkness malinger right at the surface of every wail, every guitar gyration, every rattle of the toms. They pay ho
mage their own luridity, relishing every sooty, loud moment. They musically thrive as if immortal.

When I spoke of this amazing musical — nearly magical — proficiency to my imaginary date, he replied, "Well yeah — they should be that good — because they're all vampires so they've been practicing for thousands of years. They're the undead!" He's also the clever one who came up with "preternatural" as the perfect adjective. God, I wish I'd thought of that…

Simply stated, this band is epic. Frontman James Hall emanates a compelling charisma, equal parts fascinating and creepy. Their technical prowess was staggering, and their stage presence, immense. Watching them, I felt they should be legendary by now, mythological, so heroic and raw was their sound. They oozed fame. They should be playing at hella huge venues to gobs of screaming, enthralled fans. And perhaps one day they will… next year, or next millennia? Your guess is as good as mine.