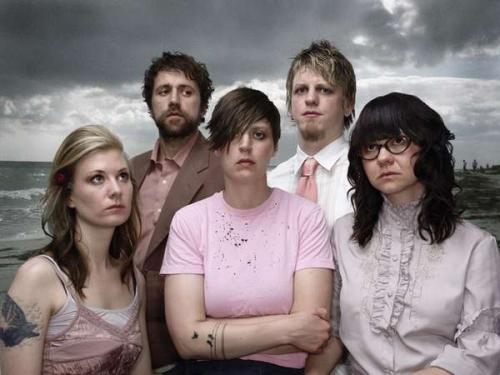 Carissa's Wierd weren't just one of my favorite local bands ever… they also spawned an entire generation of Seattle bands. It seems like any muscian who ever touched the band has gone on to create more amazing music: Band of Horses, Grand Archives, S, and Sera Cahoone all have roots in Carissa's Wierd, as does slightly lesser known but equally great Seattle band Panda & Angel.

The band's debut self-titled release {review} was one of the winners in our Best Northwest Releases of 2006 Readers' Poll. We've gotten dreamily lost in the band's elegantly understated, somber live shows, especially in the sensual vocals of frontwoman Carrie Murphy, a ringer for Chan Marshall if we've ever heard one.

The band just emailed us with some great news. They've been in the studio for the past month and a half with Ben Kersten (Grand Archives) working on their next full-length. And {this is the best part}: They posted four new tracks to their MySpace page.

The band humbly requested feedback on the songs, and after a first listen, I can tell the songs are too good to not share. "The End Is Not So" has an almost Arcade Fire feel to it with its sonic fullness. "Igloos" is contemplative and downtempo. "Our Town" has a gently rollicking feel, while "Time Bombs" picks up the pace and throws some pop into the mix, as well as some — dare I say it — rockin' guitar work. The songs have cohesion, and yet have a nice diversity of sound, and all of them are brought gloriously to life with Murphy's gorgeous vocals.

In short: these songs are really, really good. I hear a lot of KEXP airplay in the band's near future. But you can hear the future, now.

Go listen on the band's MySpace page, and let us (and the band) know what you think in the comments below.