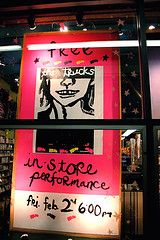 This Is How You Drive a Truck

We in Seattle are fortunate enough to have multiple local CD stores that host free, all-ages live shows (Sonic Boom Records, Easy Street Records, Silver Platters, etc). I saw my first Easy Street in-store nearly four years ago, the Visqueen King Me CD release show. It rocked, and I fell in love there! Crazy. Yet somehow I've never gone to their Queen Anne location to check out the free show goodness. I've always been a bit LQA-adverse (No parking? Too close to the Space Needle? I don't rightly know why, but I tend to avoid the LQA whenever possible.)

But happily, tonight I ventured with igLiz and a few intrepid imaginary pals to Easy Street's Queen Anne location for the joy of catching the Trucks.

It's been many months since we first saw the Trucks at their CD release show and now that I've memorized and been randomly shouting Trucks lyrics at passersby for months, like daily affirmations, I was ripe to hear my favorite ones performed live. And before dinnertime, no less!

I always welcome the opportunity to sing along to lines like the timeless, "How come you think we can fuck just because you put your tongue in my mouth and you twisted my titties, baby" and "I think it’s funny that now you want me back / Well it’s probably just an act / You must be smoking crack!" Is there a reason NOT to worship the Trucks?

Since releasing their debut self-titled record last September (note to imaginary self: um, why haven't we reviewed that record yet??), the Trucks have made quite the splash: they placed in the Top 10 Northwest Releases of 2006 in our readers' poll, ranked on our personal faves of the year, and finally liberated Liz to proclaim "Titties!" in public whenever given the opportunity (much as mclusky opened her up to C-bombs a few years back).

Even outside of Seattle, the Trucks have been making quite the stir, in sources as diverse as Daily Candy, Spin magazine, and my personal favorite, zwire, in which the reviewer proclaimed, "These girls are a bit intimidating! So much in fact that I almost want to hit on them just to see which one could crush my spirits faster."

Silly reviewer boy. The Trucks may be self-proclaimed, "hot girls with stinky pits," but they don't crush spirits. They aim to elevate them. So we arrived to Easy Street ready to electro-rock out and enjoy the show, and the Trucks did not disappoint.

I love how empowering the Trucks are. They make ladies of all shapes and, ahem, experience levels feel as feisty and in control as Lindsay Lohan in rehab. They use their to sassiness to have it all. Introducing the Pretty Parlor-brand feminists!

Right, like instead of burning our bras, we're all flashing an extra pair of fishnets?

Have Fishnet will Rally!

Viva le Power of the Fishnet!

We came with a couple of our guy friend in tow who are Serious Music Fans, and when the show got its silliest and squeakiest, I got a bit concerned that they might not see what we see and love about the Trucks. But my worries were for naught. Both gushed about how much they enjoyed the set. Then they went and bought CDs and had the band members sign 'em (perhaps just an excuse to talk to the lovely ladies of the Trucks? Perhaps!). And I've already gotten an email, gushing about how great the record is.

So there ya have it: The language of Trucks can be somewhat universal.

Totally… and they had a hard audience to get dancing. It's hard to be perky and party when it's still light outside and you're in a record store just after you (and everyone else) has just gotten off a full work-week. But the Trucks gave it their all, chanting and clapping and dancing their be-tighted (I just made that word up) little legs off to a pretty large and enthusiastic crowd in the record store.

My favorite part of the show was when Kristen talked about her shirt, which slightly resembled an adolescent pajama top, covered in hearts. She said she was wearing hearts to celebrate the month of love, because single or not, she believed in love. Isn't that sweet?

Indeed. Thems fighting words from a woman who has publicly proclaimed, "Why the fuck won't you go down on me!?!?!"

Kristen started off the show a bit subdued, which she explained early in the set was because of a hand injury she had acquired earlier that day at her dayjob, washing dishes (to which Marissa wisely proclaimed, "Day jobs suck!"). The Trucks even had to forego their couple of guitar solos as a result (admittedly, this didn't change the set much. The Trucks are nothing if not electro-xylo-focused).

But a few gauze bandages couldn't quell Kristen's enthusiasm; by halfway through the set she was clapping and dancing, whirling like a dervish and getting all riled up (and issuing a few killer screams in a manner not unlike Prince at the Superbowl). It was exciting. You just can't keep a good Truck down.

Indeed, indeed. Speaking of which, my favorite part of the night was after the show, when the Trucks gathered to sign CDs. Once the CDs were all sold, they started signing copies of their not-so-nice , drawing hearts and stars and other doodles around the article that called them "tired" and "retarded." I heart mine, and so does Dana. And the naysayers can suck it — I heart tights, I heart titties, and I heart the Trucks.