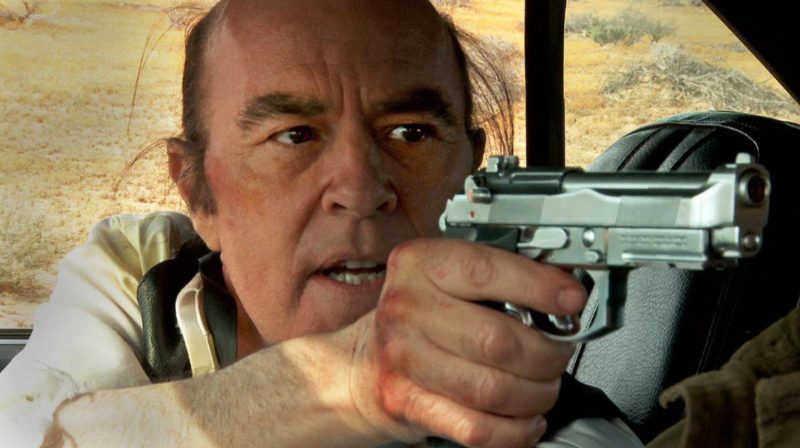 Phantasm: Ravager – Reggie the ice cream man does not mess around

“I could really go for a Rocket Pop right now”

So begins the saga of Reggie in Phantasm: Ravager, the fifth — and apparently final — installment of the Phantasm universe. The pony-tailed ice cream truck driver has been on a journey to defeat The Tall Man and save his friends from otherworldly possession and freaky rabid Jawas (aka: Lurkers) since 1979, alternately kicking-ass, singing songs, and hooking up with random chicks while driving a sweet 1971 Hemi ‘Cuda.

In Ravager, Reg enters the scene wandering through the dessert in his dirty, torn, and familiar white ice cream man uniform wielding a custom-made shotgun. He’s in search of BFFs Mike & Jody, and also trying to find out who the hell had the balls to steal his car from its hiding place. Luckily, he finds it just as those flying killer spheres show up to cause him all kinds of trouble. But that’s just the beginning …

After arriving at an idyllic farmhouse (with, of course, an attractive redhead), Reggie starts jumping time and dimensions — is he fighting the spheres looking for his friends? Suffering from dementia at a retirement home? Bargaining with the Tall man? Being saved by a gang of rebels in an apocalyptic future? Has Mike been brainwashed? Is Jody still alive? WHAT IS EVEN HAPPENING?!?

Director David Hartman takes over for Phantasm creator and cult-icon Don Coscarelli for this one, but he’s clearly a fan of the director’s style so it slots into the series pretty damn seamlessly. Ravager’s narrative alters reality so much it’s almost impossible to know what’s real and what’s a dream –  true to form of the previous installments.

There’s a fair amount of fan service here, which IMO is actually a great way to wrap a series. And even if the movie doesn’t really explain anything in the end (also true to form) — it’s all worth it just to see our beloved Angus Scrimm on screen as the Tall Man one last last time bellowing, “Boyyyyyyyyyyyyyyy!”

As a long-time Phantasm fan, I was incredibly happy with this, and I gotta recommend you go see it — at a theater for sure! You can see Phantasm: Ravager at the Grand Illusion October 7-10, and again October 12 & 13 — and you can also view a gorgeous remastered print of the original Phantasm there starting October 11.

PSST: Make sure you hang in through the credits — there are some great shots that both continue the story and flashback to some of its more kick-ass moments.