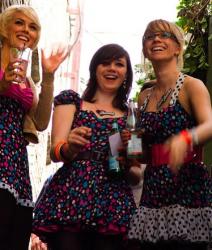 The Pipettes finally release US full-length debut, and tour to celebrate

UK lovey pop-tastic triplets The Pipettes have just announced that they'll finally be releasing their full-length debut We Are the Pipettes in the US on October 2nd, on Interscope Records. To which I say, it's about damn time! Our own Erik Gonzalez reviewed the record just over a year ago.

The US version will feature two new tracks, called "Dance and Boogie" and "Baby, Just Be Yourself," and if you want to see if it's worth re-purchasing the record (since we know you went and ordered it from amazon.co.uk after reading Erik's stellar write-up), you can listen to the tracks on the band's MySpace page.

And even more good news — the band will be touring extensively in support of the record, including a stop in Seattle at the Crocodile.

Here are all those dates, so you fans worldwide can mark those imaginary calendars…