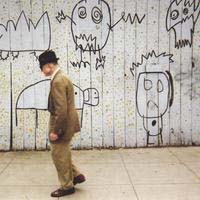 I've never heard the band Wimbledon, but now I've heard where they came from. Earl Muehlenbach was the singer and bass player for them for their two records. He lives in Seattle, and in his basement his new one man army Plenty Face recorded a homemade record that sounds like it was made on a big budget in a studio owned by Rick Rubin. He's done some time on KEXP, and has played out with NYC DJ demigod Jason Forrester and Kimya Dawson — which tells you what his attitude is: confident, creative, and careless-to-expectations.

Armed with real bass skills, acoustic trills, ghetto blasters, noise-makers, bullhorn, distorted microphones and gadgets of all type, his art dances. It's the essence and hopefully the future of private expression embracing community. That means dancing sweaty and thinking at the same time, with playful head-bobs to lost pop mutations like grebo (anyone remember the hip-hop fashion-damage dance skronk-pop of Hayzee Fantayzee?) that Earl may have never heard of personally.

Disco-reggae-jazz opener "Groundflower" urges pure joy with the refrain, "If these are my blues they ain't shit." The hilarious ball-busting next track, "Dibs," features a vocalist and arranger who seems as assured of his playful strengths as David Byrne in his prime. You can actually hear fun happening all over this disc, even when he experiments with the deep blue dirge opening of "Dead Weight Shoes," in which meandering is actually blissful (nice whale noises). Right before that, "Something Poetic" seems like a perkier Ten In The Swear Jar, a rough-house bitch slap on chugging indie-pop, great guitar work woven over cheery slap-back electronic drumming.

There is no genre for The Singing Gag, but fans of Beck, Gorillaz, Adrian Sherwood, or Tackhead would find this pure pleasure. Sure, the album could use a bit more bottom end (more bass, Earl!) and some more solidly-formed songs with choruses like the first two tracks, but that may not be his bag anyways and there's enough good stuff here to put this disc into frequent rotation for awhile.