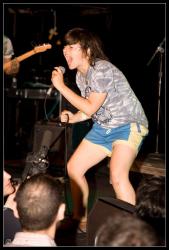 Ponytail is a noisy pop band from Baltimore that makes abrasive, experimental dance-punk. Their setup is two guitars, drums and singer – no bass. They stopped by Nectar this past Thursday in support of their excellent second album, Ice Cream Spiritual.

Watching their set, just as it is listening to Ice Cream Spiritual is off-putting at first. Singer Molly Siegel doesn’t sing per se – it she appears to make a series of random noises – shrieks, gasps, howls and other primal sounds. Pitchfork got it exactly right in their rave review of ICS when they said:

Of the however many hundreds of sounds she makes over the course of this album, maybe 1% are used in service of an understandable unit of language. The rest of the time she goes where the spirit moves her. It'd be one thing if she were "using her voice as an instrument," as we music writers like to say, but that's not really it either. She doesn't have any particular vocal gifts, no four-octave range or studied arsenal of effects, and she's not doing anything you couldn't do if you had the desire, stamina, and a few bags of medicated cough drops. But here she is.

Siegel has a spastic, crazy stage presence that reminded me a bit of a cross between Satomi Matsuzaki of Deerhoof and Karen O (although maybe it was the same bowl hairstyle for the former).

Yet, while Siegel is the first thing you notice when watching Ponytail, it shouldn’t be the only thing. It isn’t her singing that makes the band interesting (she’s only a conduit for the music not the bandleader) but the interplay between the two guitarists, Dustin Wong and Ken Seeno. Their guitar parts have lots of rough edges but that also belie incredible skill, too. Ponytail knows exactly what it is doing and, moreover, they use too many timing changes to be dismissed easily. The guitar parts are more straight-forward rock and roll (with a focus on classic rock).

Ponytail is a type of band that would fit in with the LA scene around The Smell club – they are connected ideologically to No Age and Abe Vigoda just not geographically (and are direct descendents of Television and Sonic Youth). It’s the spirit that matters, not the locale.

When Ponytail played at Nectar they were the middle band, opening for High Places. They were a compelling, although not immediately accessible, band. They were on stage for about 35 minutes and when the floor of the club filled out pretty nicely once they took that stage at 10pm sharp. The floor was for 21+ crowd and the upstairs balcony was for the all ages set. I only saw a few people upstairs watching the show but from there was a noticeable energy on the main floor for the band and most of the audience seemed to get (and dig) what Ponytail was doing. I didn’t stick around for High Places but in keeping up with Ponytail, they had a pretty high order in front of them.