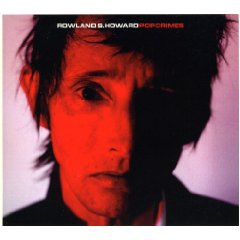 “Well, so long baby/I’ve had enough/I can’t ignore it/I miss you so much.” These are the opening lines to “Shut Me Down,” a poignant composition from the late Rowland S. Howard, who passed away in Melbourne on December 30th, 2009. Nearly two months later, listening to the song still sends waves of heartbreaking emotion down my spine. Those very words describe exactly how I feel about the painfully underrated musician. His second solo album, Pop Crimes, had only been released two months before and then suddenly, with a soft final breath, Howard signed off for good. He lost the battle with liver cancer that he had been fighting for a long time.

Ten years ago, a truly amazing gem of a record and the first one penned under his own name, Teenage Snuff Film, was quietly unveiled. Like all of his previous albums, including those with These Immortal Souls, Crime and the City Solution and The Birthday Party, it thoroughly blew me over. I couldn’t understand why Nick Cave was fairly popular and how his old right-hand man continued to be a cult act at best. Once again, after a decade of wondering what he had been up to, Pop Crimes whispered its way into existence. It is a resigned and somber opus, which is no wonder, yet his vocals and playing sound as healthy as ever. It also features ex-Bad Seed and Birthday Party cohort, Mick Harvey, on drums and organ.

“Ave Maria” is perhaps the saddest song of his career. Howard married in 1998, and separated from his wife before he died. In the song, a cadent composition lead by mournful guitar chords, he details the transformation from initial romantic bliss to utter alienation. He woefully professes, “We board the train that lovers take/But when I try to talk her/I don’t speak that language anymore.” Rowland further puts things into grim perspective, confessing in the closing lines, “For though my crimes remain unnamed/All my treasons, all my shames/Later you would rightly say/We didn’t dance upon our wedding day.”

As mentioned earlier, “Shut Me Down” is a sorrowful track that more or less defines the record. It’s a slow and regretful sounding number that includes Howard’s charming self-loathing, a characteristic of his that had been apparent since the early Birthday Party years. His guitar playing sounds crisp and his gruff vocals sound better than ever.

The song “Pop Crimes” is more up-tempo. Containing his signature guitar sound, the almost funky bass line takes the forefront, creating a framework for Howard’s unique guitar playing, which is ever fierce, soaked in generous amounts of distortion and echo. The track sounds like it would have also fit well on the second These Immortal Souls album, I’m Never Gonna Die Again.

At only thirty-eight minutes from start to finish, the all too brief Pop Crimes contains eight songs, but they are all first rate. Rowland S. Howard may have failed to emerge from the depths of obscurity, but his songs display an honesty and sophistication that is sorely lacking in today’s music world. Although his releases were few and far between, each one is an absolute treasure. Goodbye, Rowland. I miss you so much.