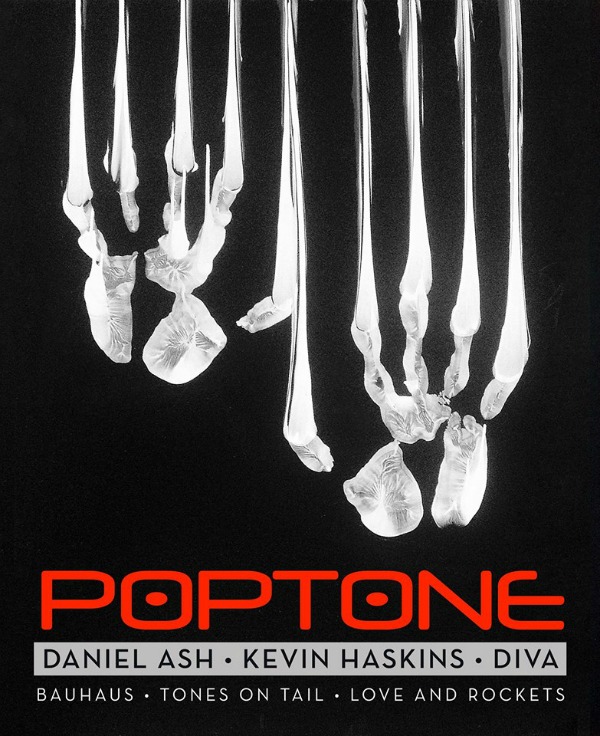 Poptone at The Neptune Theatre on Friday, 18th May

Poptone will be at The Neptune Theatre in Seattle on Friday, 18 May 2018 {more info & tickets}.

Daniel Ash and Kevin Haskins from Bauhaus, Love and Rockets and Tones on Tail are coming back to Seattle this month with their current group, Poptone. The band, which includes Haskins’ daughter, Diva Dompe, on bass, initially toured North America for the better part of last year. Their primarily archival setlist included an array of songs from the three aforementioned artists. In particular, the Tones on Tail material had not been performed since the early 1980s, which was a revelation for fans who never thought that they would have the chance to hear songs such as “Movement of Fear,” Happiness,” “Lions” and “Performance” live again.

The concert at The Neptune Theatre last June was truly extraordinary, making the expectations for this month’s follow-up performance remarkably high. If you were interested the last time that they were in town and didn’t make it, this show is highly recommended. Original Tones on Tail bass player, Glenn Campling was not available to join Ash and Haskins due to health reasons, otherwise this might have turned out to be a full on Tones on Tail reunion. Apparently, they originally thought about approaching him when plans were being arranged. However, Diva Dompe does an almost surprisingly excellent job filling in on both his and David J’s (Bauhaus/Love and Rockets) bass parts. The recreation of the original analog sound and the chemistry between the three band members is quite impressive to say the least.

In addition to this month’s West coast tour, Poptone will be releasing their debut album in June on Cleopatra Records. The self-titled release was recorded live in session last year in Los Angeles for Part Time Punks. Consisting of thirteen tracks from their setlist, all three bands are duly represented in the recording. This short leg of the tour is due to kick-off on Thursday (10th) in Solano Beach, California and wraps up on the 20th in Vancouver, BC. The biggest question is: will any different songs, or even new tracks, be represented in their setlist this time around?

Meanwhile, the other two original Bauhaus members, Peter Murphy and David J., have recently started working together again. They performed a set of Bauhaus material in Mexico in April and are slated to perform again for three nights in San Francisco in June as part of Peter Murphy’s residency at The Chapel. If the stars align, perhaps all of this will lead to an eventual Bauhaus reunion? It seemed unlikely after the acrimonious split in 2008, but now that it has been a decade since then, it seems that anything can happen. Regardless, Poptone is a must-see act that will satiate the desires of fans in both the short and long term. Tickets are still available, so be sure to buy yours now.