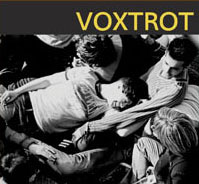 Voxtrot's Raised by Wolves EP harks back to a gentler time in music: those days of yore when smart pop with popsicle-syrupy melodies ruled the cool-kid radio airwaves without a smidge of pretension.

These five Austin artisans take cues from the Housemartins and Belle and Sebastian, with a little smidge of the Supremes' harmonies tossed in. Raised by Wolves is sugary, spicy, and all that's nice about retro-tinged indie (think sweet sixties and electric eighties) and is just right for summer. Their literate lyrics aptly suit the clever guitars, emotive strings and bouncy tambourine-laden percussion. To wit, they are the quintessential TIG band: smooth, sweet and sparkling. And once we found this picture of three of the Voxtrot lads on their website, well, we were smitten (check the file name of this photo!).

There always will be a special place in my heart for three-minute keyboard and guitar-tinged pop tunes sung by English lads with mussy hair. And Voxtrot, though they hail from the Lone Star state rather than the land of tea and crumpets, bring me right back to a precious moment in my musical education. It was the summer of 1982, when I spent a large portion of my summer vacation running through sprinklers in my backyard, and the other chunk of time plopped in front of then-breakthrough-television-programming MTV while the original generation of veejays like Martha Quinn and J. J. Jackson selected some of the finest new wave cuts for broadcast (and man, how I wanted their job!).

Hearing Voxtrot? It whooshes me right back. Their music plants a big, childish grin on my face as innocent melodies waft behind beckoning lyrics like "Jump on in, the water's fine for swimming" ("Wrecking Force"). The five-piece have a knack for perfectly meshing classic rock and roll with new wave, and it is beyond surprising that the band has not to date released anything more than this swift five-song disc and one previous single. No doubt mainstream labels and radio will soon be knocking on Voxtrot's door.

The tender EP is just five songs short, but it leaves a beyond pleasant taste-and a hunger for more-in its wake.