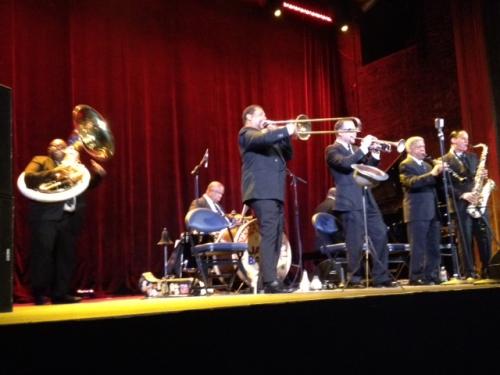 For decades, the required experiences when visiting New Orleans have included: a trip to Café du Monde for beignets, bar hopping on Bourbon Street, and catching a show at Preservation Hall. While I did miss the beignets, we Seattle folk only had to travel as far as the U District for the treat of listening to the Preservation Hall Jazz Band and their traditional New Orleans sound.

Jumping right in with a string of quick-tempo instrumental numbers including “Bourbon Street Parade,” the group blew us all away with the power of their unamplified sound. Making the rounds on solos, the individual members had the opportunity to shine and they egged each other on by both the shouting of encouragement and by raucous clapping. Band leader and trumpet player Mark Braud almost melted my face off with his blistering Satchmo-style solo.

This band has been around and touring for over forty years — but the songs never sound dated or stale, in part due to the energy and craftsmanship that rotating members invest in the music. They’ve perfected the vintage New Orleans jazz sound but also add hints of soul and R&B rhythms. Clarinet player Charlie Gabriel, a fourth generation musician whose family has been playing music in New Orleans since the 1850s, impressed with both his bluesy solos and exuberance. Providing vocals on several songs, his voice was like a well balanced mix of Billy Eckstine and Ray Charles.

Taking a Bessie Smith number and making it their own by renaming it to “Trombone Freddie” (after their own Freddie Lonzo), saxophonist and vocalist Clint Maedgen nailed the sultry grind of the choruses, while matching Lonzo’s soaring trombone runs. Later in the set, Braud again took center stage on a soulful yet playful version of “St. James Infirmary” with his baleful trumpet solos, which were offset by some well-natured ribbing from his band mates during the vocals.

Five songs into the show the band brought out longtime member Frank Desmond to guest on trombone. When he announced that they were going to perform “I’m Alone Because I Love You,” it was clear that this wasn’t the original plan but the rest of the guys were happy to scrap whatever the planned number was and roll with the change.  The moment only further reinforced the point: all of these guys have a completely mind-numbing depth of a songbook catalogued in their heads and the versatility to pull material out on the fly. I suppose that’s just the way it is when you grow up in a place that values music as a profession just as much as medicine, education, or athletics; and puts instruments in a kid’s hand before the first day of kindergarten.

After almost two hours and three encores of uninterrupted music, the band closed things out with that quintessential New Orleans standard, “When the Saints Go Marching In.”  The Seattle crowd did themselves proud, getting on their feet to dance, some even waving the colorful umbrellas usually seen at jazz funerals.  Sousaphone player Ronell Johnson served as my inspiration: after watching him dance his way through an entire Mardi Gras parade during the set, I couldn’t help but get up and join in. The rest of the band seemed to be just as entertained by his moves as the audience. And Gabriel, who is eighty and still touring with the group, seemed ageless up on stage, having the time of his life playing music with his buddies. That’s why this music will never go out of style – it just makes you feel good.