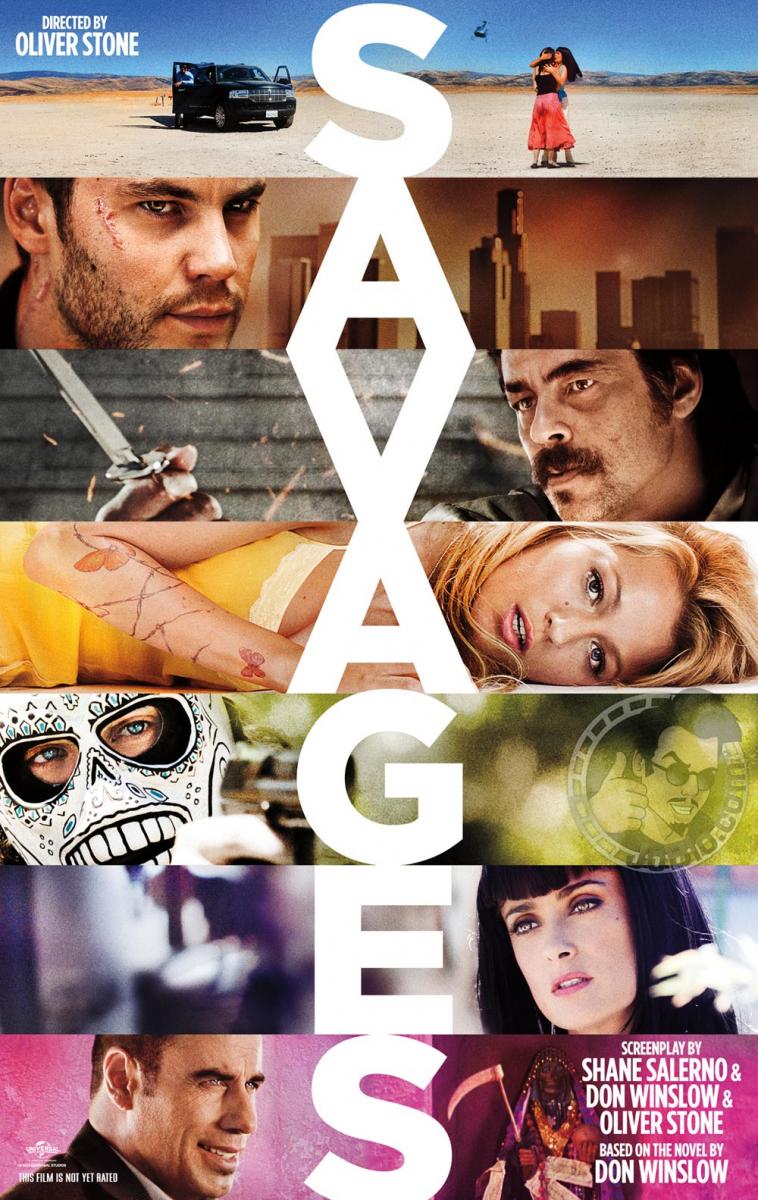 {Savages opens in Seattle Friday, July 6, and is screening at Sundance Cinemas Seattle, Oak Tree Cinemas, and the Regal Meridian}

In Savages, Ben and Chon appear on screen initially as examples of the good life. Best friends since childhood they occupy a beautiful beachside estate filled with everything one can want. Ben (Aaron Johnson) heads up a foundation that aids the poor of the world and opines on the future of clean energy. Chon (Taylor Kitsch) is an ex-Navy Seal who's come home from Afghanistan and made good.

The fact that this wealth arose from high-end marijuana production isn't especially bothersome as presented, given their focus on honest dealings and non-violent transactions. Almost forgot — both are in love with their beautiful housemate Ophelia aka O (Blake Lively) and are perfectly happy sharing her. All enjoy the quality of their product – with their drug use viewed as a rational response to the insanity of the world.

The opening scenes are sumptuously photographed – everything from the beach to the sexual congress between the three appears to be the American dream writ large. Only O's voiceover, which mentions that just because she's telling the story doesn't mean she's alive at its end, hints that this will be a much darker tale. Oh, and perhaps that the name of the film is Savages – that's a bit of a tell as well. What results over the course of the next 2+ hours is a set of bits that can be enjoyable, but as a whole it's somewhat hampered by the incessant voiceover and (at least for me) a set of characters that are remarkably hard to care much about.

Into this idyllic world enters the Mexican Baja Cartel, the Walmart of the drug trade, who want the name value of the indy Ben & Chon franchise for their own. Not surprisingly, they don't appear inclined to take no for an answer. When Ben (Aaron Johnson) declines their takeover bid, Elena (Salma Hayek) the leader of the Cartel, ups the ante by kidnapping O. Thus begins a rapidly escalating war between two sides that's gruesome, occasionally cheesy, and at times very satisfying to watch. Stone gives some of the actors, particularly Benicio Del Toro cast as Elena's vicious enforcer Lado, plenty of room to run with their parts. I'm sure as an actor it can be fun being bad – and Del Toro makes the most of it. John Travolta also gets a turn as a DEA agent corrupted by Ben and Chon.

Stone has created a frothy mix of visual thrills and pieces of nastiness that taken in pieces are very impressive. As a director, he doesn't shy away from much from anything here. His camera is rock steady, whether we're watching Chon or Ben grinding on O, or a the impact of a torturous whipping on an eyeball relative to its socket. And that's a real plus of the film (except for what maybe was noticed and hilariously discussed in this IMDB boards conversation). There's visual flair to spare onscreen, with highlights including Lado's entrance to dispatch an underperforming drug addled attorney, the boy's strike on a Cartel safe house making use of the techniques Chon picked up from the Taliban, and the firey end of a Cartel informer via burning tire.

What's odd though about is how Savages as a whole is lesser than the sum of its individual parts. Something about the overall production didn't fully gel. Largely I suspect due to the use of O's voice over narration to provide such extensive exposition. In my view, voice-over is a risky technique, if you don't totally buy the narrator it can really pull folks out of the story. While O was physically a perfect match for the role the narration lacked a gravitas that almost had me chuckling at times – when I'm pretty sure I wasn't supposed to. It's not all Blake Lively's fault. First off, it's really a spice that should be used sparingly – and there's too much of it in Savages regardless of the actress. Second, parts of the dialog are so groan-worthy that I don't think Meryl Streep could have carried them off. Exhibit A would have to me the memorable, "He doesn't have orgasms he has wargasms." Seriously? – the reference in the book that line derives from isn't Shakespeare, but it's no where near as cheesy as this. A lot of the visuals and the spoken dialog nail the pulp feel of the book Savages – but the extensiveness of the narration just felt off and kept pulling me out from truly connecting with the trio. Or at least something did.

Savages isn't totally worth avoiding on the big screen – and I think most viewers who are in the mood for the bloody, trashy side of Oliver Stone may come away satisfied. But it's not the stupendous achievement I was hoping for. Maybe the lack of connection with the characters for me was particularly accute as a fan of the book. Maybe not. Just three things I'm pretty sure are worth noting expectations (a) it's no where near as awesome as the slickly cut trailer would have you believe (b) there's a film school discussion to be had about the narration things – not good and (c) boy is there a wimp out conclusion waiting for fans of the book. Seriously, that last part was just lame, lame, lame – effing ridic.