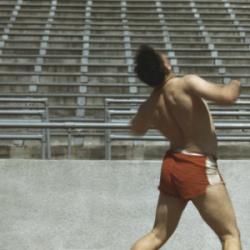 Earlier this year, some friends and I set out to see Cataldo play a show at Neumo’s in support of The Globes and Say Hi. Once we’d contended with a malfunctioning parking meter, we waltzed in just in time to catch the last two or three minutes of their set. One can, however, gather quite a bit from a couple minutes of great music. Upon hustling a rough copy of their new LP Prison Boxing, my deep appreciation for this ensemble was solidified.

Initially, I was reminded of Hey Marseilles (an equally excellent band in which drummer Colin Richey does time) but that’s an oversimplification. Think Colin Meloy sans the prog rock and historical fetishes — and you’re still not all the way there. The brainchild of Eric Anderson, Cataldo offers up an effortless blend of pop and folk immersed in elegant arrangements and radiant melodies. Thankfully, even when things get a bit simpler, the results are still fulfilling. On the masterful “Things You Need to Know” the proceedings are just as remarkable when Anderson’s voice is accompanied by a barely-there acoustic guitar. When the arrangement fleshes itself out past the three minute mark, the subtlety that reigned previously takes on even greater meaning.

The real jewel on the album is “Cash on the Barrel.” If there’s been a lovelier composition to release by a Northwest band in 2011, it’s been conveniently wiped from my memory. The keyboards gently echo across the speakers with nuance not unlike a Mike Mills piano part from some long lost outtake from REM’s Automatic for the People. When Anderson asserts “What is more infatuating than infatuation?", I dare you to keep your heart from falling to pieces. I, for one, contend that a song reaches elite status when I find myself unable to shut the hell up about it. So goes my relationship with this superb pop confection.

So, my fellow music lover, I implore you to buy this record as soon as is humanly possible. Let’s face it, if you’re reading this, you’re obviously a fan of local music and Prison Boxing is very much in the pantheon of great Seattle area LPs of the past several years. Moreover, see Cataldo live as often as you can (your next opportunity being October 8 for Seattle Weekly's REVERB music fest in Ballard.) Budget some time to find parking though, because even though a mere two minutes of listening will yield much enjoyment, a full set will no doubt be purely blissful.