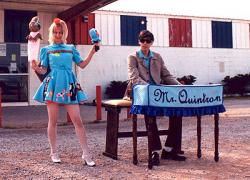 Quintron and Miss Pussycat's Variety Hour and a Half

This is the 47th live show review I’ve written this year and I’ve easily been to hundreds and hundreds more shows throughout my life. I can honestly say that of the countless shows I’ve been to, I've never been to one that began with a puppet show that involves a creepy Santa Claus, gunfire, and characters being turned into statues. It was that kind of night.

Seeing Quintron and Miss Pussycat live is a unique experience. I know we rock writers like to say that someone is “peerless” or “one of a kind” or “does something no one else does” and that isn’t really true. There may be only one Bob Dylan but how many people do you know that play guitar and sing? For Mr. Quintron, that is entirely accurate. Most artists work within the bounds of their instruments. Mr. Quintron invents his. As Wikipedia says:

Mr. Quintron is a multi-instrumental one-man-band. During performances, Mr. Quintron utilizes a custom-made Hammond organ/Fender Rhodes synthesizer combo which he has had custom outfitted to resemble the body of a car, complete with working headlights and a license plate which reads “Mr. Q”. Mr. Quintron is often accompanied by The Drum Buddy, a rotating, light-activated analog synthesizer, one of many which he has created and manufactured himself. Mr. Quintron frequently plays multiple instruments simultaneously, the Hammond organ acting as his primary instrument, and the Fender Rhodes supplying bass lines. He can often be seen keeping time on a hi-hat with one foot while toggling between a volume and wah-wah pedal with the other. Mr. Quintron is regularly accompanied by his wife Miss Pussycat, who sings backup and plays maracas.

The Quintron and Miss Pussycat show that I saw on Friday night at Chop Suey was like a mad scientist’s Vegas variety show adopted for a club. The Quintron and Miss Pussycat experience begins with puppet show and proceeds with music for most of the night, with a pretty inappropriate joke thrown in (one that I didn’t quite get, don’t retarded things come out of both Sarah Palin’s mouth and vagina?). It wasn’t quite polished enough to be a Vegas show, and all the better for it. Mr. Quintron called a break about 45 minutes in to the show so he could run to the bar and get a drink (whiskey with ice) and didn’t seem to have any set list. Several times throughout the show Quintron, Pussycat and another dancer, Shopping Bear, jumped into the crowd to sing and dance. I think they tried to form a conga line to the sound booth and back late in the set.

When I got to Chop Suey, pretty much at midnight (give or take 2 or 3 minutes), the club was comfortably packed but not too crowded. The vast majority of people were on the dance floor. Towards the end of the show, the bar area was nearly vacant (mostly because it was getting late, around 1:30). I think most people enjoyed the music more than the puppet show (or at least I did). While the music was very good, it was almost secondary to the spectacle of a Quintron and Miss Pussycat show.

The music of Quintron and Miss Pussycat played Friday night is mostly lo-fi electronic dance music. He, of course, provided the music and they each sang about 50%. They closed the night with a cover of Glen Campbell’s “Rhinestone Cowboy”, which Mr. Quintron called “an anthem of show business” and the lyrics were “the last meaningful words said about the publishing industry.” Quintron reminds me of Jerry Lee Lewis as a performer as he would do nearly anything to give the crowd a good performance. He sat at his organ and rocked out while beating on the thing and jumped into the crowd a few times. Only with Lewis, someone else surely built his piano.

Throughout the night Mr. Quintron asked for someone in the crowd to get him a drink (except for during the two or three minute break when he walked to the bar and got one himself) and someone always obliged. I think at the end of the night he said he had more than he could drink.

The show lasted about an hour and a half and by the time it was over Mr. Quintron said it was the best show on their tour so far (“Fuck Tucson!”), and although he probably says that at every stop, he had to have appreciated the countless drinks that were delivered to him. It’s the hospitality Greg Nickels likes to brag about.