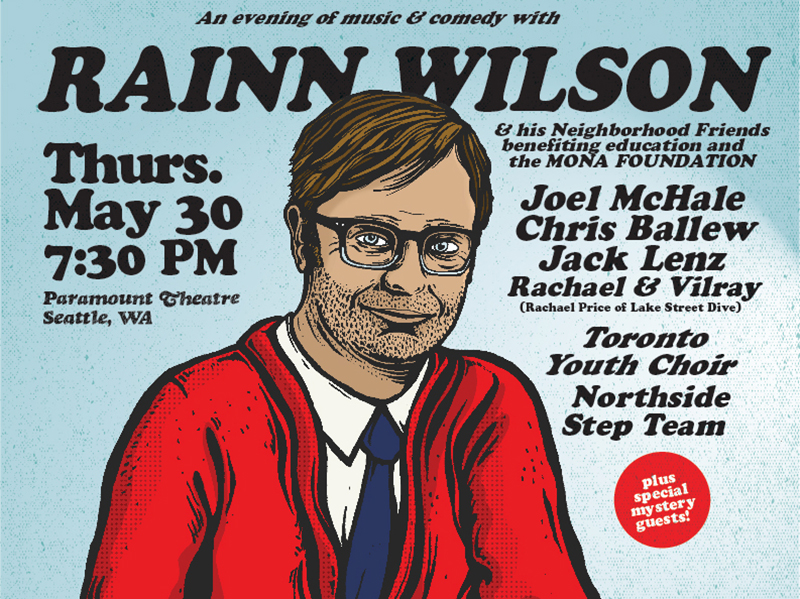 Rainn Wilson Has Friends, And He’s Bringin ‘Em to Paramount

Long gone are the days of Dwight Schrute with his endearing, awkward, know-it-all, beet-loving ridiculousness. Now Rainn Wilson is playing the field, you might say, grabbing gruff and cranky roles (Backstrom), cartoon voice acting roles (Adventure Time!), and the occasional nerdy roles (Star Trek: Discovery). One thing hasn’t changed though, he’s still a big goofy sweetheart in his personal life and loves his hometown. How do I know this? Well at Emerald City Comicon this year he plainly stated (despite his mailing address in Los Angeles) “Seattle will always be first in my heart”.

Nothing makes that more obvious than the incredible party he’s bringing to our town at the Paramount on May 30th dubbed Rainn Wilson And Friends. This isn’t the first get together he’s had with his “Friends”; as a matter of fact, he started putting on these shindigs almost a decade ago. The first I can remember is way back in 2010 when he brought Craig Robinson, Andy Grammar and Sean Nelson along to celebrate and raise funds for the Mona Foundation, just as he is again this year. He dubbed it “the perfect charity” and has taken part in Khiels openings,  trips to Haiti, and numerous fund-raisers for nearly 20 years. He’s not some fly-by-night philanthropist, this one… he puts actions behind his words and I couldn’t be prouder to consider him a fellow Seattlite. I’m sort of in love with this charity myself; in their own words: “A global community of individuals and organizations who believe that the key to alleviating poverty and achieving sustained community transformation lies in education and gender equality.” They offer funding and opportunities around the world for young folks to get the education they deserve, gearing their efforts toward young women. Damn… now you *have* to buy a ticket…

Here’s the extra fun stuff you’ll get when you’re there: Comedy! Music! Dancing! Silliness! More specifically, Rainn is bringing celebrity friends (as promised in the name of the event) the likes of Joel McHale, local musician Chris Ballew, and legendary composer Jack Lenz… and you never know who else might show up!  It’s a really great time for a really great cause, check out the show-specific info below and have a night to remember.