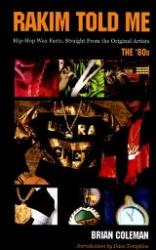 Rakim Told Me: Hip-Hop Wax Facts, Straight From The Original Artists (The 80s)

The first two twelve-inch singles I ever bought were "The Message" by Grandmaster Flash and the Furious Five, and The Dead Kennedys' "Too Drunk To Fuck," after reading about them in a forgotten Seattle rock 'zine in the early 80s. Both of these discs converted me to the textures of fat groove vinyl with intense topical statements, featuring lyrics written in excruciatingly precise detail about things both every day to me (I drank a lot and couldn't perform) and exotic (so that's life in NYC?).

Thus, for the next ten years or so, hip-hop and punk were synonymous for me. I followed both The Flesheaters and then Run-DMC as they grew through the decade to record definitive statements of life in the twisted Reagan Era (Hard Road To Follow and Raisin' Hell, respectively).

While one bit hard on the past for its contemporary anger (fuzzed up, non-commercial guitars), another took a chomp out of the future for its back-canvas (drum machines and distorted bass levels). But both were saying things in a similarly honest, creative way to their respective audiences, which back then weren't so far apart or so many.

80s punk and hip-hop shared something else besides lyrical content: They were both rarely written about well. For the most part, punk rock fanzine writing broke away from any sense of literary connection, even if the "movement" was initially formed by rock critics themselves (Richard Hell, Patti Smith, Chris D., etc.). So 'zine writing about that music broke down to minimalist anti-celebrity piss-takes (to deflate the egos of Rolling Stone writer-poseurs) and terse, "humorous" short reviews of new albums.

The people who could write about the decade's progressive sounds from the inside usually didn't bother to — save for someone like Steve Albini in "Forced Exposure", but he's pretty exceptional at whatever he happens to do. And when it came to rap, certain writers at mainstream magazines tried to fit the burgeoning genre in between advocating their own personal "college rock" favorites and having to deal with hair metal bands and attention-snapping mega-stars dominating coverage. Sure, there was the Village Voice and some other periodicals trying to keep on top of things, but they were mostly run by older white male rock critics who never saw the humor or art in either.

As we came into the 90s, hip-hop 'zines like "Ego Trip" and rock books like Michael Azerrad's "Our Band Could Be Your Life" started to bring back the sense of "you are there" to the creation of the music to describe and explain the artists and their intentions with clarity and truthfulness.

Brian Coleman, who handled the 'Classic Material' column for "XXL" (a magazine I never read, even when I worked at a whack rap label, assuming it to be typical corporate ad-zine about what's MTV-hot and who got shot) is a journalist who has crafted not only a great book about the creation of some of the best hip-hop from its introduction period into the mainstream, but an almost perfectly written music guide about great music, period.

This review has been long delayed since I saw that Michaelangelo Matos did an interview with Coleman for the "Seattle Weekly." I don't see it everywhere in stores in Seattle, but it would be a hideous shame if serious fans of music writing weren't tracking this trade paperback collection of exciting interviews down; it is just as enjoyable and enlightening as any other classics of popular music writing such as "Stranded" and "Psychotic Reactions".

I myself have only owned maybe a third of the records written about in "Rakim Told Me", and have not heard some of the artists written about (or forgot what I have heard), but this is exactly the kind of book that makes you want to go out and buy even the lesser efforts Coleman lovingly discusses with their creators, as his passion and wisdom makes you adore the genius he finds in the music.

My favorite parts of the book include the descriptions of how Schoolly D and his crew freaked out his engineer Jeff Cheesesteak while recording the evolutionary "P.S.K. What Does It Mean?"; the incredible rise of Ice-T and his ability to profit from and maintain peace between the elaborate politics of East Coast-West Coast rivalry; the sense of the uncanny and unexpected in the work of Kool Keith and Ultramagnetic MCs; the pleasurable, playful, but intoxicating pressure of Run-DMC in recording the first great hip-hop album, Raisin' Hell, elucidating exactly how Rick Rubin and Aerosmith were used; the success and scrapes associated with 3 Feet High And Rising, and De La Soul's urge for the music to evolve and avoid commercialism.

And these are actually pretty mellow parts of the book, which doesn't flinch when examining the struggles and aesthetic provocation of KRS-One, Too Short, or Public Enemy (that's where the main dramas are).

Obviously, another couple of books this size could be written about the other hip-hop albums from this period, but that's no fault of Coleman's. He worked with what he could get, and one man can only do so much. But here's hoping he can write those books as well, and future volumes about how the best of this incredible music has been created since.