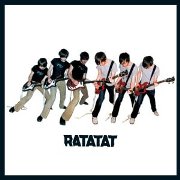 Remember that episode of Friends when Ross decides to play his 'sounds' for the gang? He gets out his keyboard, sits in front of his audience, steadies his hands and begins a cacophonous medley of samples set with a stone face; this guy is SERIOUS about his music. The group tries to stifle laughter, praising him to his face for his genius work while secretly dying inside at the horror.

Flash forward to 2004 and the release of New York band Ratatat's album, Ratatat. Two guys, a keyboard, a guitar-and not a lot of creativity.

Before the band stops me to say, "No you didn't!" let me explain: It's not that the music on this CD is horrible. Truly, the duo exhibits a fine appreciation for the baroque of days old and the beats of days present, with a little Ode to Joe Satriani thrown in for good measure. Arpeggios and chord progressions that would warm sir Bach's belly abound. Layered atop simple manufactured drum beats, the pieces for strong dance tracks start to fall into place (think Daft Punk, Kraftwerk).

The guitar-meets-keys-meets-guitar (sometimes it's tough to discern the instrument) flash hints of metal brilliance (power chords for keyboards, anyone?), but unfortunately most of the melodies sound more like the warm-ups trained musicians play before a performance to prep their chops.

And thrown over a rudimentary compilation of beats, the whole project sounds more like the product of your kid brother and his best friend's new Casio keyboards and a few hours of "composing," which resulted in a proud performance for you and your parents on Christmas night, 1984. This stuff isn't groundbreaking. (And lest we forget that the concept of melding fugues with drum machines is not entirely new either — remember "Hooked on Classics"?).

All 11 tracks on Ratatat monotonously blend together, save for the opening track "Seventeen Years" (the worthiest of all to be a single – and possibly a surefire dance club anthem). But the CD slogs off as it progresses. By track 8 or 9 it feels like a chore of repetition, the metronome still ticking away at its original setting, the songs not developing any further.

New York's Ratatat has received a lot of positive critical acclaim, probably partially because the two members are part of the 'in' crowd (the duo consists of producer Evan Mast, aka E*Vax, and multi-instrumentalist Mike Stroud, who played guitar for both Ben Kweller and Dashboard Confessional. Even Interpol's Paul Banks is known to show up at live gigs on guitar). But despite their indie-rock cred, Ratatat's album sounds hollow, unfinished — perhaps a solid basis for a hiphop classic. Standing alone, however, it just falls flat.