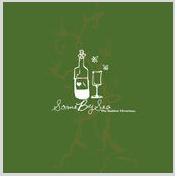 Get Off the Ground if You're Scared

As those close to me know, I am not a Death Cab For Cutie fan. So my initial impression when I heard Some by Sea frontman Chris Du Bray's vocals was to wonder if I would be able to make it through the whole album. Thankfully, I kept listening.

Some by Sea has accomplished something that Death Cab had not — they kept my attention. Here I thought I thought I hated this kind of music, and here I was enjoying every minute of it. What was the reason for this? Why was I so enthralled? And then I had an epiphany: it wasn't the voice that I couldn't stand in Death Cab, it was the lyrics. The lyrical depth of what Some by Sea conveys on Get off the Ground if You're Scared doesn't fall prey to the teen angst I find prevalent in DCFCs catalogue.

Lyrics like: "This is the outside, not the inside/ Last call for crossing the lines I've drawn in the sand" and "We build castles for nothing, we knock them down to nothing instead" show a thought process that is philosophical in nature and leaves an intellectual impact upon the listener beyond the Happy Meal® level.

Another nice touch is the Carissa's Wierd string stylings, which help to distance the music away from the obvious vocal influence. The occasional female vocals by Rachel Bowman are a nice addition and really help to fill out the record nicely. The result is intelligent emo-rock that surpasses its influences and reaches a wider audience (people like me) but sounds enough like its influences that it won't alienate fans of that legion. I'd say that's a pretty impressive feat for such a young band.

On top of all that, the sound quality of the record totally fits the band. Producer Josh Royal nailed their presentation. They should form an alliance with him for as long as they want to release records in this vein, because it totally works.

Overall, I was impressed by this record. It's fairly derivative in nature, yet a refreshing representative of its genre. This band should grow nicely into their own shoes, and help to bridge the gap between the kiddies and grandpas like me.