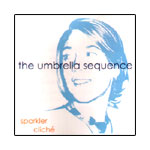 So I want start off by saying that I sympathize with the struggling musician. It's damn hard to find the line between writing a song that hits a positive nerve with people and writing something that sounds so much like one's influences that it pisses off critics like me. So on this little tangent I will begin my comments on the Umbrella Sequence and their record Sparkler Cliché, which is an amazingly fitting title for these Minneapolis Radiohead enthusiasts.

Opening track "The Disappearing Line" sets the up the listener for disappointment. Sounds like a band that's covering Muse covering Radiohead. I don't have a problem with Ryan Rupprecht vocals except they aren't as good as Thom Yorke's, so why he would try to sound like him is beyond me. Now the whole Radiohead obsession aside, the arrangements of their songs show promise. Songs like "A Presswood Smile" and "So Shine Sunshine" show a lot of thought into creating very fluid and interesting structures. However, the lackluster quality of the guitar tones and mediocre studio trickery throughout the record work against those arrangements. It takes a lot of studio time to make a record like this sound good, and these boys fell short on that investment.

All is not lost on this record. "Factories Make Colors Possible" is actually a very promising song. I feel if the band explores this direction with their influence, then their future could be bright. So to recap the dilemma we have with a band like The Umbrella Sequence: good structure, poor tone, karaoke vocals, not enough money to be on MTV… and one really nice song.