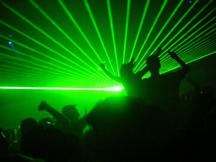 Have you heard about this? There was a rave going on in Utah this weekend. The police raided it in full-on combat gear, with helicopters, tear gas, the works. You can watch a video of the raid here.

I first read the story over on Daily Kos and was completely horrified/taken aback by the situation. According to the first-hand report on Daily Kos, this event was 100% legal. "They had every permit the city told them they needed. They had a 2 MILLION DOLLAR insurance policy for the event. They had liscenced security guards at the gates confiscating any alcohol or drugs found upon entry (yes, they searched every car on the way in). Oh, I suppose I should mention that they arrested all the security guards for possession….. the police did not have a warrant. The owner of the land already has a lawsuit against the city for something similar. A few months ago, she rented her land for a party and the police raided that as well. And catch this, the police forced her to LEAVE HER OWN PERSONAL PROPERTY. That's right. They didnt arrest her, but made her leave her own property!!!"

This is truly terrifying shite. After I read this, I was ready to storm the castle, beat the man, run for my life, etc.

Instead I googled for more info. The story as told by Salt Lake City Tribune tells a very different story… "Investigators learned that no permit had been requested for a mass gathering which requires a bond and Utah County Commission approval for groups larger than 250, said Gilbert. Police learned around noon Saturday that the rave would be held in the Diamond Fork area of Spanish Fork Canyon and assembled about 90 officers from several agencies to enforce crowd control.

Undercover officers filtered into the party when the doors opened about 9 p.m. By 11:30 p.m. police confirmed that more than 250 people were in attendance and stormed the party. During their two hours at the DJ-driven dance party, undercover officers had observed a multitude of illegal activities including the sale and consumption of drugs such as cocaine, ecstacy, alcohol, methamphetamine and marijuana.

Notice the differing reports about the required permits? I'm wondering what the truth is here.

Did the media upsell the drugs of a rave (cause c'mon, it was a rave) and lie about required permits in order to negate the human rights violations in the story? Or did the DJ who witnessed the event not have his facts straight? Anyone out there have more information?

I haven't been able to find anything too interesting in the online news (shocker) so I'm hoping someone in the imaginary world might have more answers and insights. I've blogged about this over at Music for America, so click this link to post comments and info.

I'm the one and only {imaginary} dominator.