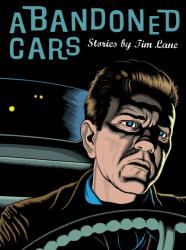 For those who were thrilled by the tribute to film noir at this year's Seattle International Film Festival, and are craving that same sexy, dark psychosis in some graphic novels, locally-based/internationally renowned publisher Fantagraphics recently put out three books to cooly creep out your summer.

Abandoned Cars: Stories by Tim Lane was released last year in a beautiful hardcover, but now is available in a more affordable but just as high quality trade paperback. Tapping into the madness of American mythology, road stories, tall tales, hobo code, rock and roll lyrics, urban madness, rural sickness, these stories of losers, goners, and low-rent thugs has brilliant homage-design, dense text, and the nervous energy or dread of a True Blood on HBO (only with psychic, not fantasy, vampires), or a "John Wayne Gacy, Jr." from Sufjan Stevens in song. A couple hundred packed pages of not so quietly but very mordantly funny desperation.

West Coast Blues by Jacques Tardi and Jean-Patrick Manchette might look a little familiar to people familiar with the periodical Heavy Metal (the long-running genre-serial magazine of weirdness begun first in Europe), because French illustrator Tardi was often reprinted there. But the musical inspiration for West Coast Blues is pure cool jazz, its shrewd but who-gives-a-fuck protagonist an addict of players like Gerry Mulligan, Stan Getz, and other guys perfect for setting a soundtrack lush with baritone sax and sudden brawls. George Gerfaut is an ordinary guy (who just likes to get a buzz on pills and bourbon and drive fast) who gets a hit placed on him after he helps someone out who owed the wrong "made" man. His strange half-beatnik/half-businessman lifestyle is thrown into violent chaos, by comics-reading musclemen who have decided to play a killing game with the wrong nihilist. He's willing to go into hiding to draw out his revenge, and it's in these strange windings of the plot that Manchette (author of ten brilliant noir novels, including this one) keeps you burning through the pages. The black and white artwork is expansive and uses an oscillation of detail (often stark, especially when someone's getting their face blown off) which makes it addictive to stare at. This is my favorite book by Tardi, who I hope adapts more of Manchette's work; if you love Chandler or the mood of Elvis Costello's "Watching The Detectives" this is your graphic novel.

King Of The Flies by Mezzo and Pirus is the biggest and boldest of these three books; like Abandoned Cars it is short stories, but it is actually a segmented novel as cohesive cumulatively as West Coast Blues. The German translation (subtitled 1. Hallorave) is gloriously colored and though the artwork is disturbing and seductive in the best band flyer way, it really helps keep its paranoid saga of violent raves, Jarvis Cocker obsession, pills, confused teenagers, alcoholically demented fathers, pills, enormous bug masks, atomic fears, pills, hubris-distorted redneck greasers, and more pills spinning in your head long after you read it. Sort of like if Richard Lanklater (Waking Life, A Scanner Darkly) filmed a script co-written by Davids Lynch and Cronenberg, or the comic version of an LCD Soundsystem mock opera. Damaged but delightfully compelling, and two more volumes are set to be released by the amazing Fantagraphics.