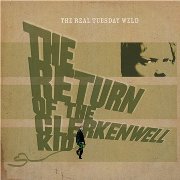 The Return of the Clerkenwell Kid

A young Englishman named Stephen Coates was on drugs in Clerkenwell when he met himself.

Maybe it was the Stephen of the past, one who lived in a chipped bedsit, sleeping all day, leaving as the sun went down to go to nearby clubs to hear suave vocalists with pale dapper black vinyl-laquered hair crooning Tin Pan Alley ballads, scoring scripts for morphine syrettes from mob doctors, delivering bathtub gin to temperamental night clerks, and entertaining various women — circles of sloe-eyed, chain-smoking women, with meager restraint and slender necks.

Maybe it was the Stephen of the future, who would make music blending the soft-psychedelic bossa-nova laptop-cabaret of his dreams with the well-polished instruments of yesterday, charming yet another Stephin — this one who has a band called Magnetic Fields, and who would take Stephen's little orchestra on tour with them, for like-minded, out-of-time velvet gun chamber suitors and their adored muses.

The Clerkenwell Stephen was initially so inspired by a dialectical work of literature entitled I, Lucifer that he wrote a musical accompaniment to it as his debut. Like Hal Hartley's film Book of Life it took a rather eloquent view of a certain disassociated member of a hubris-king's entourage, and Stephen populated his version with champagne-swilling characters milling to music from those darkened dance halls some are eternally fated to.

His follow up for the label Six Degrees The Return of the Clerkenwell Kid is supposedly a concept album about a love affair, documented as the artist wakes naked from the waist down in a foreign parlor unable to speak, knowing he needs to change his life, give up smoking and eating fried meals and taking any pill from a mystery pile, and just as he makes such an assessment for his own good meets his angel, who makes the effort worthwhile.

He knows it might just be another trip ("I don't believe in love / until I'm in love / And I don't know if it's a miracle / Or just chemicals in us"), and that inevitably neither are immortal ("We're just like daisies … trying to avoid the cows"), but that rain falls both on the wicked and the righteous (" … but I ain't complaining / I love the rain") so every moment must be savored, even with so many questions left unanswered ("Am I In Love?").

Just when the chamois-feel of Coates' voice begins to seem a little too oiled, the clever clip of the songs start to seem kitsch-predictable, just when too many cozy rhymes start piling up, a Beatlesque splash of ontological anarchy occurs (the vocals at the top of "Something Beautiful"), a little modern keyboard work dazzles (halfway through the same song), a truly beautiful arrangement dazzles ("At The House of the Clerkenwell Kid"), a banjo is plucked perfectly ("Am I In Love?"), a line that evokes the eating-fucking-shitting of life stabs out from the melodious miasma (all over the generous seventeen tracks).

Now, some of the stronger material were live favorites before Coates conceived the album, but they don't juxtapose harshly with the conceptually intended — it would actually be hard to imagine the album as strong without the gentle "I Love The Rain," the obnoxiously clever "Daisies," or the hilarious opener, "Anything But Love."

I could possibly be stoned for saying this (okay, I'm already stoned), but the Real Tuesday Weld's latest might be more of what Magnetic Fields fans wanted after 69 Love Songs, rather than i — something with a little more breath, a little more scope, just as literate yet less as if it was crafted from nights spent in a recording oubliette. But I wouldn't dream of pitting Stephen against Stephin.