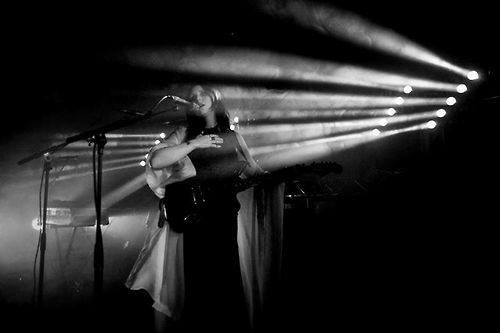 The evolution of Chelsea Wolfe has been intriguing to witness. Her first widespread official album, The Grime and the Glow, was released in 2010. Sonically, she embraced a gothic folk sound that developed our her next few records where her voice falls somewhere in between Marissa Nadler and Siouxsie Sioux. In 2013, Wolfe released the lovely and  sophisticated, Pain is Beauty, which introduced electronics into the song structures. From here, her next move was 2015’s Abyss, which began to incorporate some heavy doom laden guitars into her songs. This trajectory set the stage for Wolfe’s most recent album, Hiss Spun. Released last month on Sargent House, her newest effort is a full blown doom metal affair that is a deliberate band effort.

Chelsea Wolfe will be performing at The Showbox in downtown Seattle on Monday, 30th October (more info). To experience the transformation of her music stylistically and to see a truly unique artist who has created consistently great records, this show is highly recommended. Although Wolfe is touring with a band, her set should include an array of tracks from her back catalog. New recruits and longtime fans will not be disappointed.