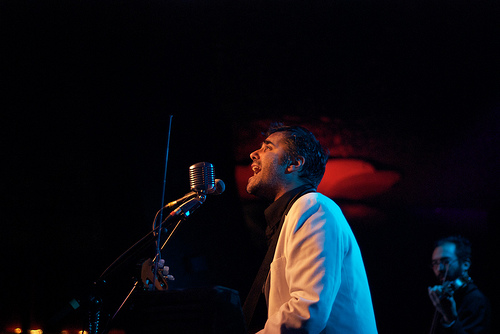 Sweeping anthematic tones, booming lungs, tuba solos, a carnival parade — if you like your indie with some orchestral firings and the twinge of a vaguely Slavic wedding-slash-funeral party sound, then DeVotchKa is the band for you. Should some gross oversight have left albums like How It Ends and Una Volta out of your back catalogue, you’d do yourself a favor to stop, drop and roll on over to your record dealer of choice and pick them up immediately. However, since you’re here in imaginaryland and all, it’s a safe bet that (a) you know and love DVK as much as we do and (b) you’re pretty much beside yourself that you’ve got a chance to be within spitting distance of Nick Urata when they band takes the stage at the Paramount next week.

And as if that fact itself wasn’t enough to make you giddy, get this: we’ve got two tickets to give away! That’s right, you and your +1 have got a shot to see DeVotchKa on us. Just send an email to tig {at} three imaginarygirls {dot} com with the subject line “QueenOfTheSurfaceStreets” by noon on Wednesday, March 2nd. We’ll draw a lucky winner and notify you by email, and tickets will be waiting for you at the box office the night of the show. Like magic!

(PS: shame on you if you don’t have tickets in your hot little hand already! Get on over to the Paramount’s show page to pick some up here before it sells out and you’re kicking yourself in the rump out on Pine Street. Seriously.)

We’ll see you at the Paramount!