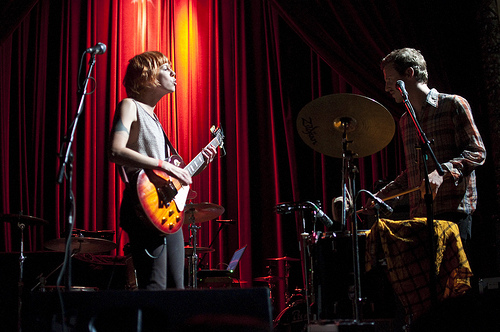 Recommended show + free tickets: The Mallard at the Comet {5/20}

A little shy of a year ago, we were spending an August night out at Columbia City Theater, helping our friends over at Sound on the Sound celebrate their fifth anniversary. And in doing so, not only did we get to party our pants off with a hell of a set from Pickwick and jam on some Tom Petty covers with the Petty Party, we also got turned on to a rad-ass band from San Francisco called The Mallard. In their own words, they're an "inside-out-echo-laser-garage-psych-rock trio… [whose] home fried songs harness the naked abandon of 60's punk, but inject the form with a deranged spirit all their own. Close attention to texture and dynamics allow the band to explore unusual terrain – to grant access into unexpected realms of beauty and terror… with dessert." Draw your own definitions from checking out their Soundcloud page here, but whatever adjective you want to put to it, it's clear that this band is on the good shit.

Since that last show, they've expanded to a three-piece, and the trio they've become will be bringing their groove to the stage of the Comet this coming Sunday night, opening for Koko and the Sweetmeats. As you probably guessed from the post thus far, not only do we wholly endorse The Mallard, but we want to give you a chance to see them live! So here's the scoop on free tickets: send a love note to tig {at} threeimaginarygirls {dot} com with the subject line "SendMeToTheMallard". We'll pick a winner around lunchtime on Friday, so be sure to get your email in to us before then for a chance to win.

We'll see you there — and good luck!