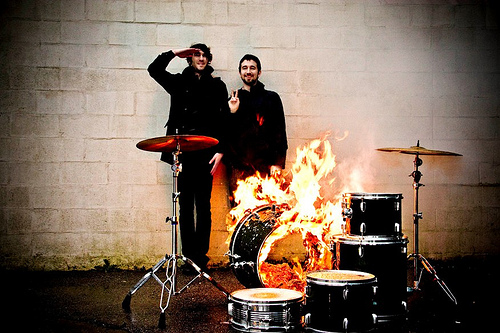 Japandroids are the high-energy musical collaboration of Vancouver, B.C. natives Brian King (guitar/vocals) and David Prowse (drums/vocals). Much like No Age or The White Stripes, Japandroids make the most out of their two instrument set-up –often giving the impression that the full sounds they are making are coming from more than just two people. Their 2009 release Post Nothing was a 36-minute blast of energy, highlighted by shout-along anthems "Young Hearts Spark Fire", "The Boys are Leaving Town" and "Wet Hair".

June 5th marks the release of their second full length album, Celebration Rock. The album doesn't veer far from their familiar formula of grabbing the listener by the arm, taking them on a wild ride, and not letting go until the album is done. The album is already getting rave reviews and is currently streaming over at NPR, which you can take a listen to here.

If their recorded work is any indication, their live show promises to be a sweaty, beer-fueled affair. They kick off an American tour at Neumos on Monday, June 11th with Cadence Weapon opening up — and we want to send you and a friend to a show! Just send an email to us at tig {at} threeimaginarygirls {dot} com with the subject line "CelebrationRock" sometimes between now and the end of the day on Thursday, June 7th. We'll pick a winner and let you know by Friday that you're on the list for Monday's show!